There’s some things on a boat that just wear out, and when you see them everyday, you don’t think about it. But if you step back and look at it with fresh eyes, you think, wow, that looks really bad.

Last weekend I attempted to pull the Lifesling out to make sure it did indeed still float. 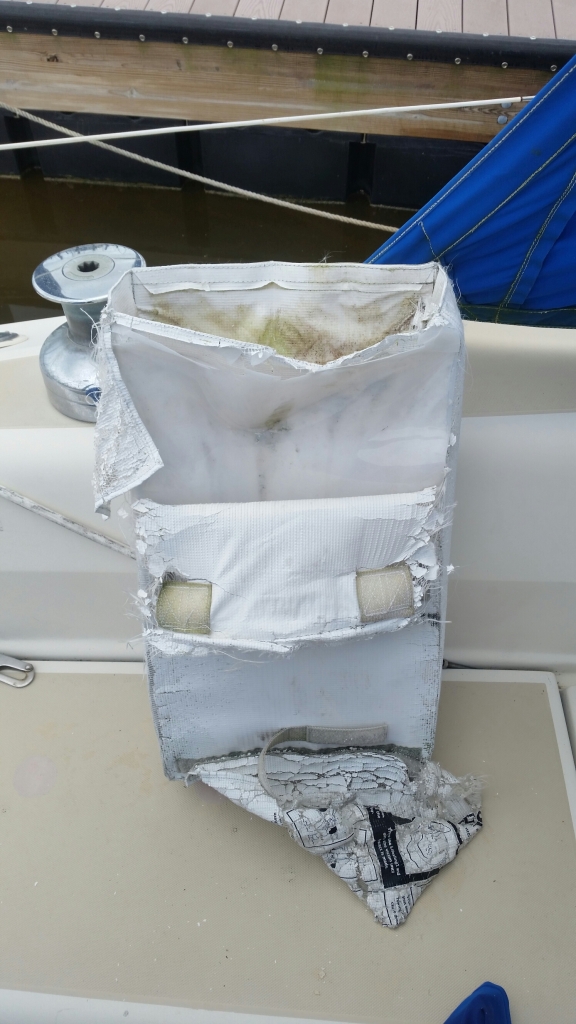 The float wouldn’t come out. In fact, the Lifesling case, which had been hanging by the rail from just a few threads to start with, finally ripped off the rail.

The interior had become a nice shade of green and attached itself to the Lifesling while the white vinyl proceeded to crumble into thousands of tiny pieces all over the cockpit.

While we found a pattern to sew a new lifesling case from sunbrella, we also found that West Marine sold them for $49, so after weighing the pros and cons of the time Mary would spend making a new one, we decided to just replace it. Thankfully the float and rope were still in great shape, so I scrubbed the green off of them, and they were ready to go.

You may also notice in the photo above that our lifeline covers have a sharp bend in them.

When we bought the boat it came with the blue sunbrella covers on the upper life lines covering broken pieces of PVC pipe. We assumed this was something the previous owner had rigged up.

When Mary started to take them apart to wash the sunbrella, black dust started pouring out of them. What we hadn’t realized is that these were originally padded lifeline covers, but they were so old and deteriorated that all of the padding inside had turned to dust — and that dust had now turned the entire cockpit black.

Needless to say, the lifeline covers were also replaced.

Then, after six years of saying, “I should really get a grill,” we finally bit the bullet and bought ourselves a grill.

The cockpit is now cleaner, safer, and ready for some barbecues at anchor if the weather ever warms up!