While walking the dogs this weekend we heard quite the racket coming from the trees around the marina. There was an incessant chorus of what I guess I’d describe as a croak-squawk mixed with regular squawks and a bunch of wing-flapping and branch rustling. We had to go investigate.

Black crowned night herons were everywhere in the trees, and as we stared harder, we discovered the source of the croak-squawking. 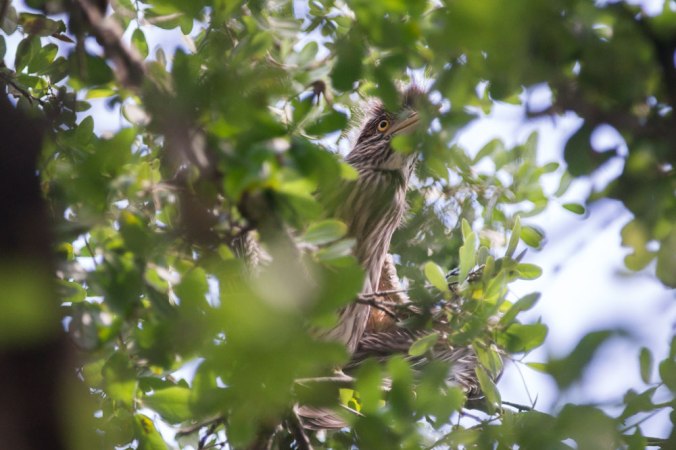 Nests with very large baby black crowned night herons were everywhere. Most nests had two chicks, and some trees had up to four nests. They were all demanding to be fed while their parents hopped from branch to branch nearby, nervously wondering what we were doing under the trees.

It was hard to capture a good photo due to all the leaves and branches, but the chicks seemed comically large for the size of the nests.

When we walked back by on Sunday, we actually saw the adults starting to coax the chicks out of the nest for their first flying lessons. Of course, not all of them looked happy about being evicted.

I’m sure that in another week or two we’ll see these little guys balancing on dock lines and grabbing fish out of the water, just like their parents.