I did manage to sleep past sunrise Monday morning, but the sun wasn’t very high before everyone on the boat started moving around looking for breakfast. I took a quick snorkel and found that a school of jacks was under the boat. Cade threw his line in the water and within minutes had reeled one in on his makeshift fishing pole, crafted from an old boat pole, two discarded battens, several hose clamps, and a lot of tape. 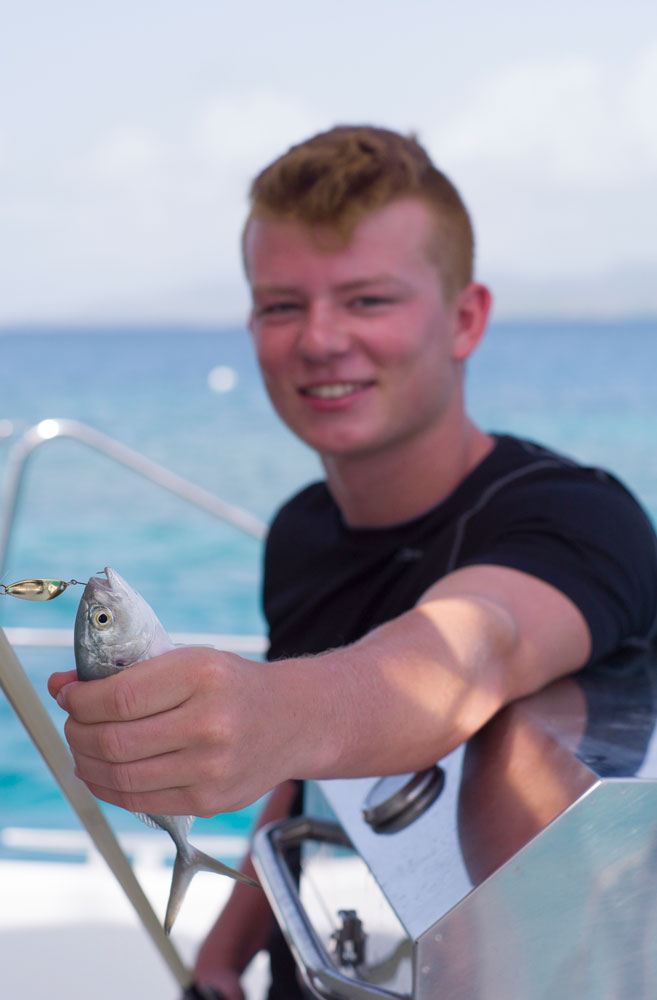 The Sail Caribe captain on duty called us back about the dinghy and suggested we empty the water trap on the fuel filter. We did, and it started right up, so we told them all was good. Big mistake. Although it started after dumping the filter, it wouldn’t hold idle, and it made getting from the boat to shore for the rest of the week a giant headache. We’d have to rev it up to start it, then throttle down, pop it into gear, and then immediately rev it back up again. It was a process that required perfect timing or the engine would die and take ten minutes to start again. In retrospect, we really wish we’d insisted they fix or replace it that morning before we left the area.

The rest of the morning was pretty relaxing. 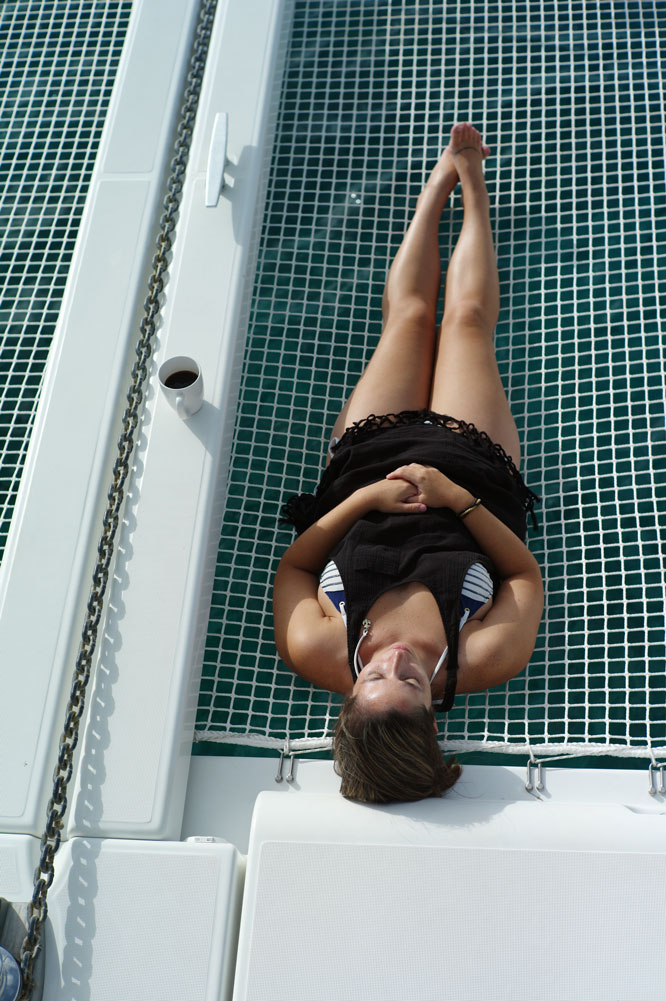 Just after the first ferry showed up with El Conquistador visitors we realized we were on a mooring ball that said DIVE USE ONLY instead of DAY USE ONLY, which explained why there was a cattleboat full of people waiting to snorkel sitting and staring at us. We quickly moved balls and finalized our plans with Batubara and Chateau du Mer to head south to Vieques. 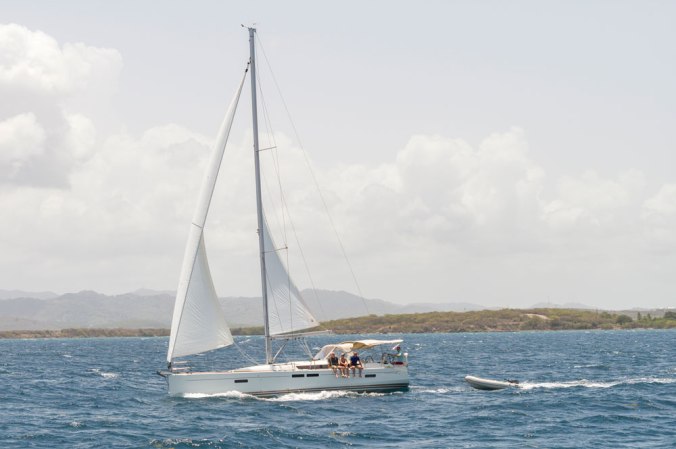 We had a nice day of sailing between islands, and Mary while still anxious, seemed to be getting more used to the swells. She had no trouble prepping lunch while we were underway.

Although we all left at different times, at one point we all ended up sailing together.

Not that the teens remembered any of it. Once we hit the open water, they were passed out. 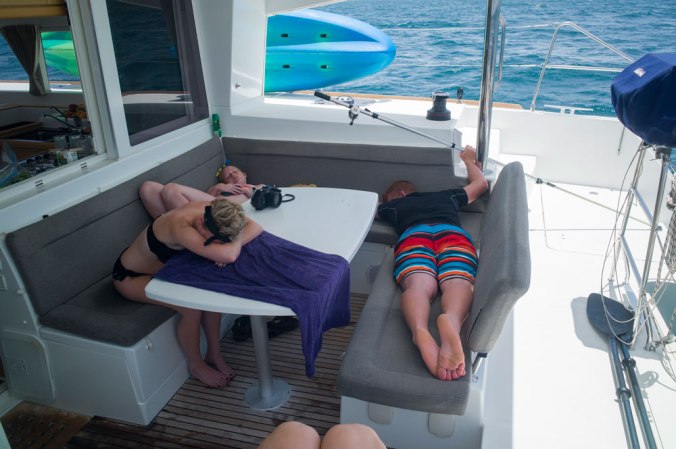 We dropped anchor at Punta Arenas, and I put on a snorkel to “dive my anchor” for the first time. It’s a pointless activity in Galveston Bay since there’s zero visibility in our water.

When I made it to the anchor, I found a small fish had already decided the dugout area under the plow would make a great new home. I hope he enjoyed it for the one night we were there.

Mary and I kayaked to the beach, and while pretty, the sand was grainy and hard to walk on. There were also lots of spiny anemones along the water line, so we had to be very careful where we stepped.

We ended up being the only three boats anchored in the area.

When we got back we cleaned up and set out snack trays for the pirate party as our guests came dinking over with their eyepatches on. 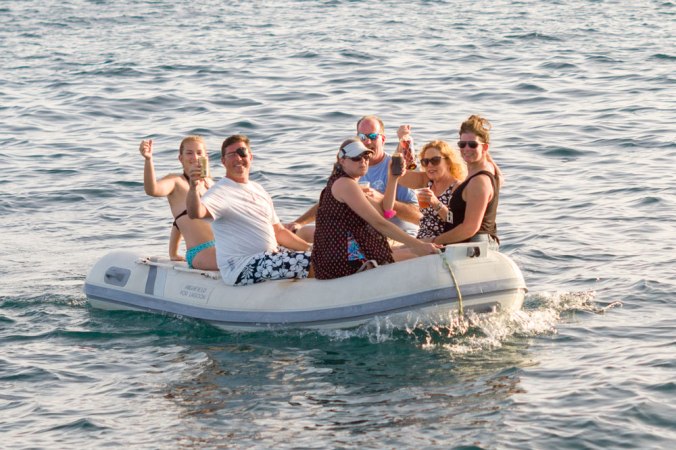 Andy and Jayne graciously donated a bottle of Ron Zacapa XO Solera Gran Reserva Especial for the party. I’m not much of a liquor drinker, but I don’t think I’ve ever had rum quite so good.

It was a bit crowded to have 17 people aboard Caicu, but everyone had a great time. Then, as the sun went down the crews of Batubara and Chateau du Mer departed, so that we could cook dinner.

The teens whipped up some spaghetti, and we all laid on the tramps looking up at the milky way. We saw two shooting stars that night before heading in to bed.

Thankfully it was a cool, breezy night, so we opened the hatches and went to bed.