We’d moved the kayaks around to the starboard side of the boat to give the visiting dinghies access to our transom, but we hadn’t moved them back. Now they were repeatedly banging against the side of the boat right beside our berth.

I got up and re-tied the kayaks to the stern pulpit and went back to bed until the sun was shining into our open hatches. 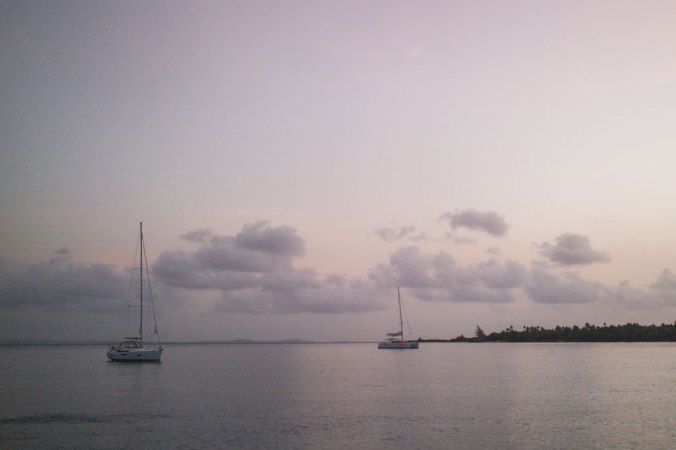 It was dead calm but a rough morning. The salon looked like a fraternity house with empty cups, cans and bottles everywhere. We slowly started cleaning up the mess while Andy phoned the captain on call to find out where the air-conditioner breakers were located.

We reset the main air-conditioner breaker, but then flipped off the breaker for the salon unit. We decided we didn’t need air-conditioning in the salon enough to deal with the mess or electrical problems it was creating.

Being a very calm morning I tried stand-up paddle boarding for the first time. It was much harder than I expected. I’m pretty sure I just looked like a wobbly clown. 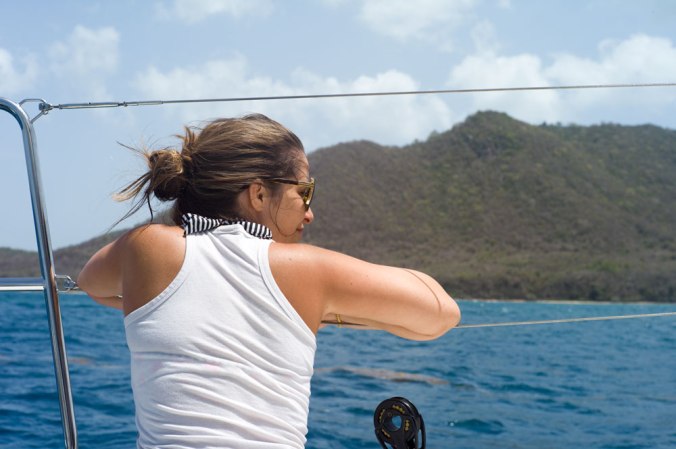 We pulled up anchor and headed southeast along Vieques. We’d been warned several times by the charter company that we were basically going the wrong way, and that it would be a rough sail, but we wanted to visit Bio Bay during the new moon.

As we rounded Monte Pirata we saw a salty looking boat headed west, but that was the only traffic we came across until we arrived in Esperanza.

Esperanza, Vieques came with special instructions from the charter company. The first was to call Christine to pay for the mooring ball, which would be $25 per night. Again, when we actually picked up the mooring ball, it also had Christine’s name and number, same as in our charter books, written on fenders in marker attached to the mooring balls. I have no idea of Christine’s last name. Apparently in Vieques you don’t need a last name.

We called Christine, but we didn’t get to meet her. Instead, a woman named September dinked out to take our cash. We assumed she was working for Christine, but who knows? Either way, she said she lived with her husband on the big catamaran at the edge of the harbor, so if we needed anything, just come find her.

I put on a mask to check the mooring and found that someone had run giant chains across the bottom of the bay and all the mooring balls were connected to those chains, which I assume were secured at each end. It seemed to work.

Of course, there were three wrecked sailboats clearly visible around the bay. Maybe that’s what happens to people who don’t pay Christine?

Our second instruction from the charter company regarding Esperanza was to lock our dinghies, lock our boats and to make sure that nothing was left on deck to go missing in the night. This admonition made Esperanza feel a bit suspicious from the get-go whether justified or not.

While the girls went to shore to do some shopping, Cade and I went to explore the sunken sailboat. We tied our dinghy off to the spreaders and snorkeled around it for a while. It was fascinating how many species of fish had taken up residence in and around the hull. 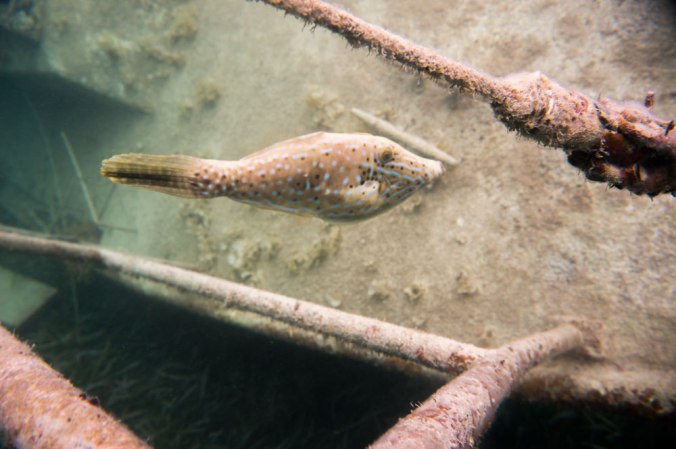 Mary had an interesting time grocery shopping. Thankfully she did not add canned escargot to our meal plan. She and Jayne ran into some of the Vieques wild horses on their way back to the dinghy dock (but didn’t take a photo). 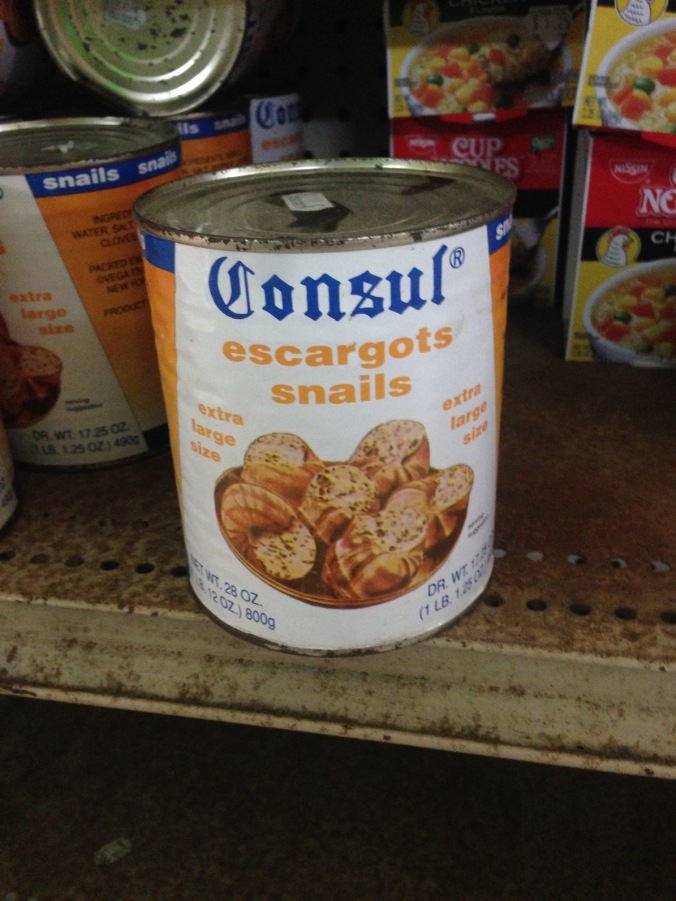 We did our best to lock up the boat before heading to shore for dinner only to find that the big sliding door on the back of Caicu didn’t actually latch. Sure, you could lock it, but not being latched to anything the door would still slide right open. We did our best to make it LOOK locked and crossed our fingers.

After thoroughly locking up our dinghy we took a stroll up and down El Malecon, or “The Strip”, to check out the junk shops and survey our restaurant options.  Despite having discussed splitting up for dinner, so that we didn’t overwhelm any one restaurant, most of the crew still ended up at Duffy’s for dinner.

Locals were cruising the strip in beat up cars with loud stereos hoping to be noticed while island dogs happily trotted back and forth between restaurant patios hoping for a handout. 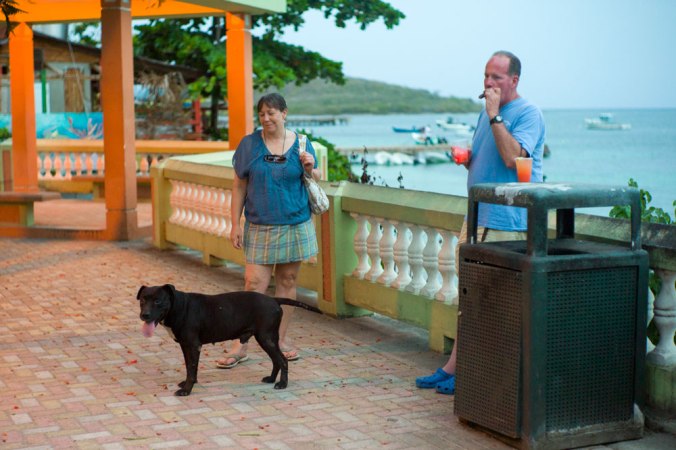 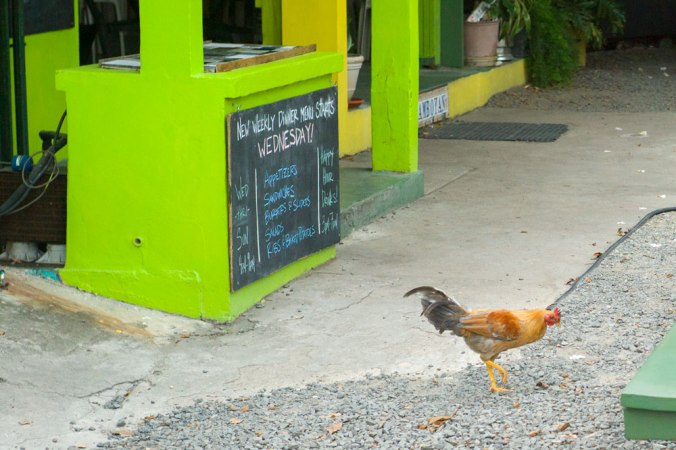 After dinner some of the group grabbed drinks at Bananas while we waited for the sun to go down then we headed back to the dinghy dock to meet the bus that would take us to Bioluminescent Bay.

While waiting near the street in the dinghy dock parking lot we noticed a guy that sent a young kid, maybe five or six years old, down the dock with a flashlight to check the locks on all the dinghies. Then a few minutes later a car came in, pulled right down to the dock and angled it’s headlights for a view of the dinghies. It saw there a minute or two, then pulled back out and drove off.

Perhaps people were benevolently making sure all the dinghies were secure. And maybe those guys in the car were just looking to see if their friend was ashore. However, it felt pretty suspicious from where we were standing.

A few minutes later an old yellow school bus arrived to pick us up and take us to the Island Adventures Bio Bay headquarters, so we could all pay for our scheduled tours. We had just enough time to grab one drink in the Bio Bar before getting back on the bus and heading to Mosquito Bay.

There was a time when you could swim in the bay, but these days your only option is to take a guided tour by kayak or aboard an electric pontoon boat. Since we had a crew of 17, and I hoped to get some good photos of the phenomenon, we opted for a private pontoon tour.

We were greeted by a very enthusiastic, pony-tailed docent on a sidewalk covered in phosphorescent spots. He immediately explained the difference between phosphorescence, reflecting light, and bioluminescence, generating light.

Our guide gave us the rundown on the single-celled organisms Pyrodimium Bahamense, the dinoflagellates that give off a blue glow when the water is disturbed. Then we cast off and there was a lot of banging and kicking the boat in an effort to make fish jump, which would resulting in glowing water, but obviously the most intense glow was coming off our propellers on the back of the boat.

Then the guide went into a long explanation of the lifecycle of mangrove trees, which was kind of interesting, but everyone just wanted a photo of the glowing water. However, the flash photography and lights from the phones was irritating the guide, and he insisted everyone turn off their electronic devices.

I had all my camera equipment aboard, but even with an f1.4 aperture at ISO 3200, I still couldn’t get any sign of the bioluminescence to appear without resorting to long exposures.

Even when captured in photos, the glow just looks like underwater LED lights, so you lose the magic of the moment. It is really cool when the guides let you put your legs in the water and kick and suddenly it starts glowing around them like magic fairy water. They also did the “bucket challenge” where a volunteer got a bucket of water poured on their head, which glowed as it doused them. That was pretty neat as well.

Everyone agreed that Bio Bay was worth the experience … once.

We saw more scruffy horses on our way back to the dinghy dock. Our dinks seemed fine, and our boats had not been bothered while we were gone.

Everyone was too tired to party. As soon as they were aboard the boat they headed for bed.

The wind picked up quite a bit during the night, and the cat was rolling enough that I kept having dreams that we were underway.