Many of our fellow rum race crew mates are currently or have been American Sailing Association instructors. However, I was surprised when Mary announced to me that she had decided to sign up for the instructor course to begin teaching ASA 101, Basic Keelboat Sailing. Thus began a very intense four weeks of studying and sailing.

While Mary had passed the ASA 101 class three years ago, it’s not like we sit around discussing the parts of the boat or the center of effort. I mean, half the time when we’re about to tack I yell something like “tally-ho” because I can’t remember what you’re actually supposed to say.

Her books arrived and she spent every waking hour for at least two weeks memorizing names of lines, parts of the boat, rules of the road, and the meanings of all those strange flags with different amounts of dots. 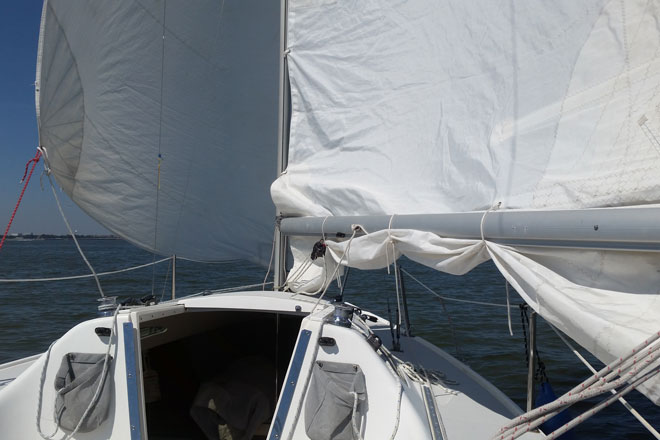 Many, many years ago at Scout Camp I taught Small Boat Sailing merit badge, but it was nothing close to the intensity of the ASA test. In fact, we had several friends who said, “You’ll probably think you failed it, but it’s made to crush your ego, so make sure you come back the next day.”

It was a rough start. For the first hour, things did not look good, and my coaching and commentary was not too appreciated. Then, suddenly, it clicked! After that it was just tack after tack, jibe after jibe, setting and naming every point of sail. Then came figure eights for the man overboard drills. She was on fire!

When the weekend of her course arrived, she scored a 96% on the written test and passed her practical and her teaching exam with flying colors. She walked out with a written recommendation from the instructor for every sailing school in the area.

To say that I’m proud would be an understatement. In the past year she’s gone from having anxiety attacks when the boat heels to crewing in rum races, making offshore passages, and now instructing classes.