The weather here in Texas is just starting to be really nice for sailing.  As such we have been having a lot of people coming out of the woodwork with requests to come sailing.  Which I love!  In past years we haven’t had a lot of luck getting people to drive all the way down to Kemah and dedicate their whole day to us.

I was super excited to invite my friend Megan down for her first sail and her birthday.  We’ve been friends since we were little, and she lives here in Houston, but we never have the right days off together.

We had to rush down to the boat Saturday morning, and run a few errands.  I was already feeling guilty when I arrived late to my guests all hanging out on my boat without me.  We got right to work readying the boat though.

We had our forestay and backstay hardware replaced during the week, and when we went to put the sail back on the roller furling, we were missing a shackle. Of course when you’re under pressure you can’t find a thing in a boat, so Fred made a run to West Marine and $22 later we had a new one.

Finally we were off.  We did a close reach all the way to Redfish, and made really good time anchoring after about 2 hours.  When we got there we found we had a host of familiar boats around us, and dinghys where shooting about everywhere.

After we had all helped ourselves thoroughly to a couple plates of cheese, and a few beers Fred went forward to lift anchor and we jib sailed into the sunset.

Nothing better than a downwind sail back from Redfish.  🙂 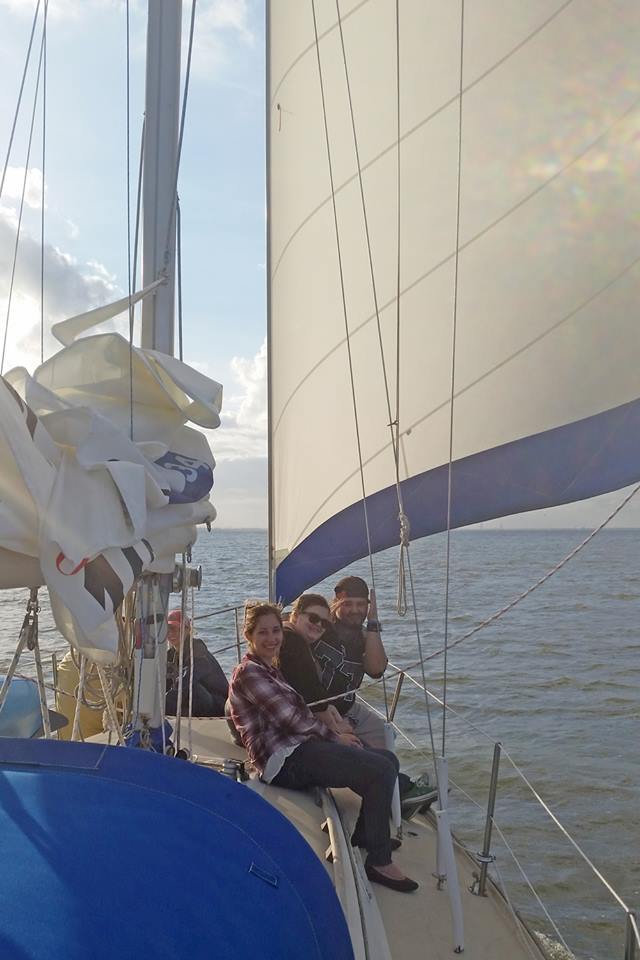 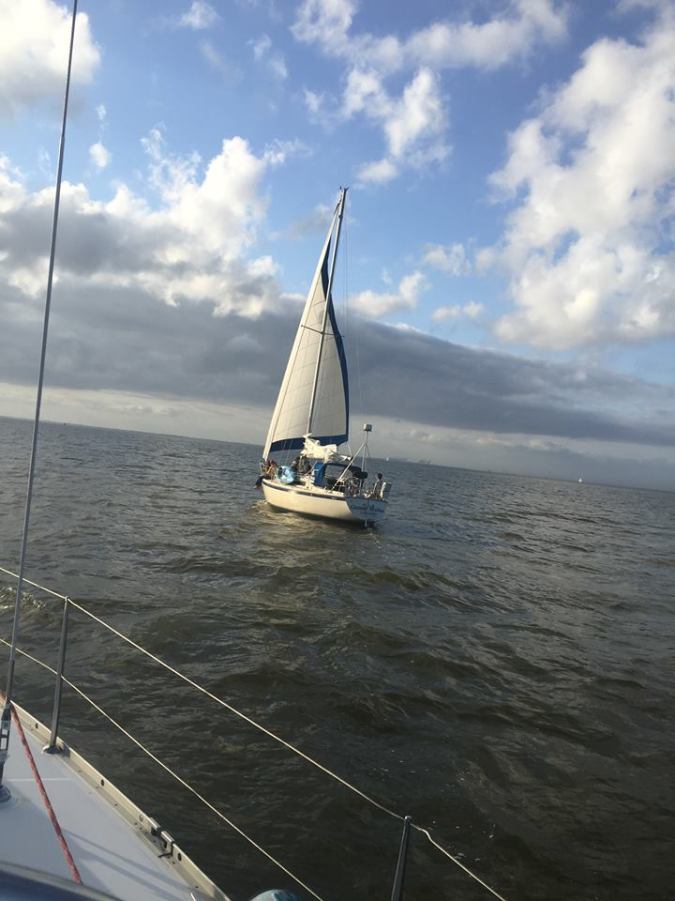 Big thank you to Rachel Primeaux and Kelly Dodd whose pictures I stole!

Here’s a little story about the madness of two people. When we moved Gimme Shelter to Watergate Marina three years ago, we ended up sharing a slip beside a rundown O’day 25 in need of some serious elbow grease and TLC.

After almost a year on the market, the owner finally donated her to Boat Angels, and we thought that would be the last we ever heard of that vessel. 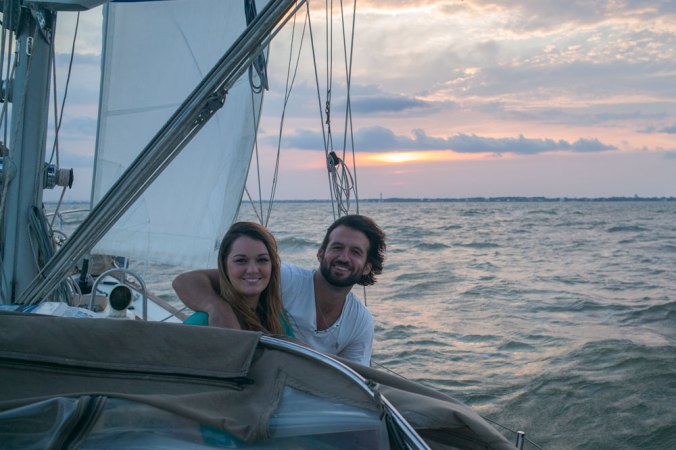 They quickly discovered that there is no such thing as a cheap boat as they tackled a rotten floor, quirky electrical system, and an outboard that just wouldn’t run. However, they persevered.

Eight months later we were honored to be invited, along with our friends Kelly and Jennifer of MV Celtic Cross, upon the maiden voyage of the now running and aptly named SV Folie à Deux. 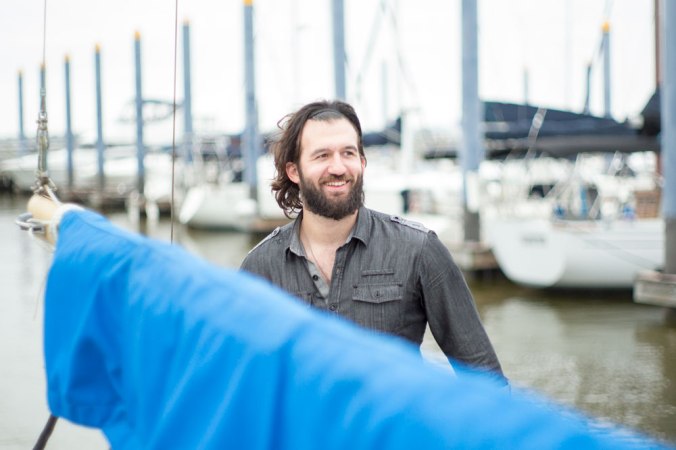 The outboard purred like a kitten as we motored out of the marina. 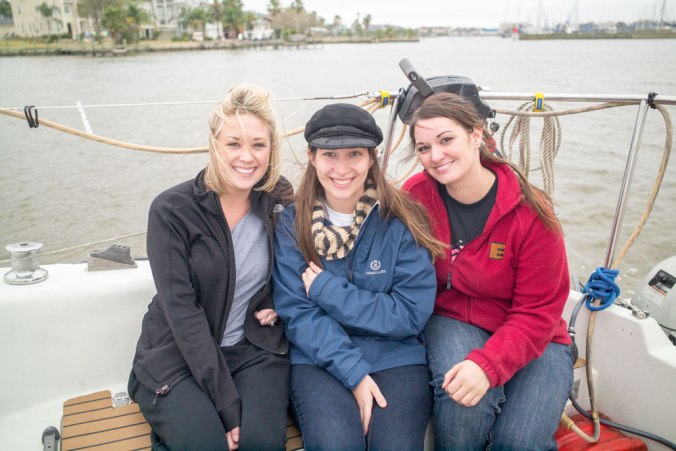 Various projects and high winds had kept us all at the dock Saturday morning, so there were smiles all around once we were out on the water.

Once we made it across the lake, Mary and Kayla dropped anchor, and TJ broke out some champagne to celebrate the event.

I think we’re even starting to convince the motor boaters that it’s time to trade up to a sailboat. 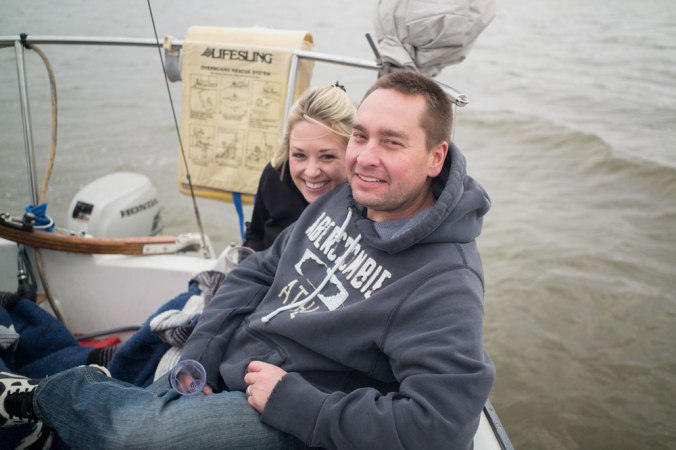 As Folie à Deux doesn’t have working running lights yet, we had to hurry back in before dark, but a great time was had by all.

Congratulations TJ and Kayla, your sailing adventures are about to begin! 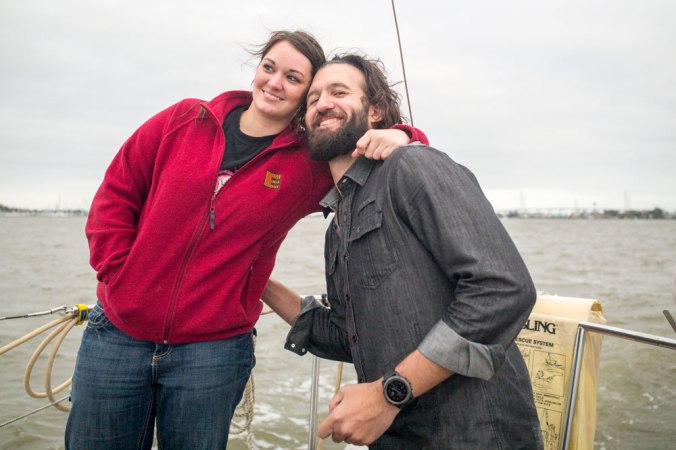 At the end of 2015 we decided it was time for a new mainsail. As you may remember, we did some exhaustive research on the topic.

After talking with all of the sail makers we finally decided to go with Banks Sails, both because they matched the 10% seasonal discount all the other companies were offering  and because they are the only sail loft still doing all the cutting and sewing right here in Kemah.

Trent, Keith and Chris at Banks invited us to watch them cut out and sew our sail, but unfortunately that happened the same week as Mary’s accident, so we had to take a raincheck. However, we finally got a chance to visit and watch them working on some other projects.

Trent showed us how each sail is designed on the computer. The design is then split into panels, which are plotted onto a roll of sail cloth in a pattern that will minimize waste.

The seams are marked and the panels are cut out on the big machine at the back of the loft.

Then the pieces get stitched together. The entire floor of of the loft is raised to table height and the sailmakers sit in pits, which are the actual floor of the building.

We had one tiny issue with our new main. During our second time out, the slug on the clew popped out of the track. 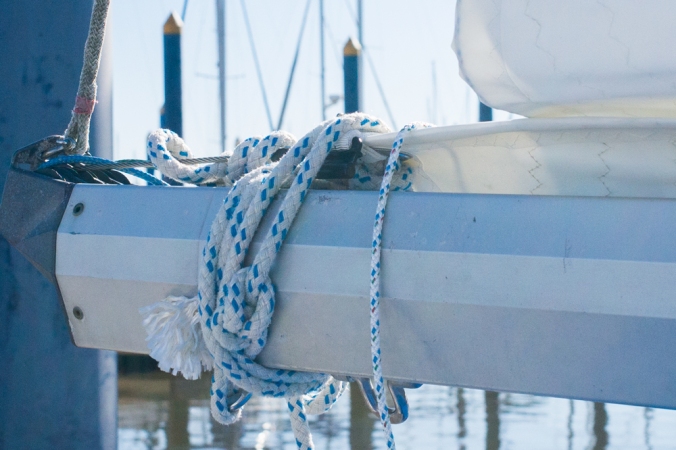 By the time we got back to the boat the next weekend, Banks had already replaced the slug with a larger one and added a velcro loop just as an extra precaution.

It feels good to support a local business, and we’ve been so happy with their service, they’re now helping us design a new stack pack and bimini for Gimme Shelter.

Banks will be at the Southwest International Boat Show at South Shore Harbor March 17 – 20, so stop by and ask  Trent his trim secrets. There’s a rumor that if he’s on your boat during a rum race, you’re guaranteed to win.

I had a huge video project land on my desk a few weeks ago, and I knew I was going to need more artillery than what I usually carry in my camera bag.

I decided to try borrowlenses.com for this project. I have no connection to the company whatsoever. I ordered three Sony A7 cameras, two Sony FE 28-70mm f3.5-5.6 OSS lenses, a Sony Sonnar T* FE 55mm f1.8 ZA lens, and three extra batteries for 25 days.

I got a message the day before the cameras were supposed to arrive telling me that they did not have the Sony A7 cameras I had ordered in stock, so they were upgrading my order to the newer A7II model for no extra charge.

On the date promised, two packages arrived via UPS.

A small box contained the three lenses and three extra batteries as well as the return labels for sending the lenses back.

The second box had a nice Pelican case and the return labels.

Inside the Pelican case were the three camera bodies, three batteries, and three battery chargers.

All of the cameras had clean sensors and functioned perfectly.

Since we were going to be working outdoors in a shipyard I purchased the insurance, but we thankfully did not have to make any claims.

I don’t get jobs this large very often, but I’m very impressed with the service from borrowlenses.com and will not hesitate to use them again in the future.