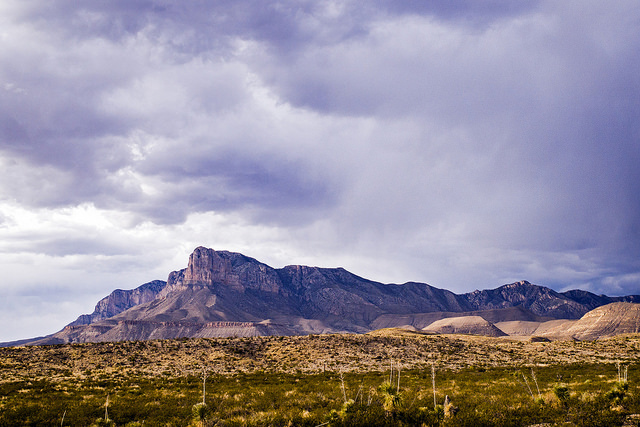 Our backpacks were too heavy. Nobody had trained. Nobody had even worn their packs before except me, and mine hadn’t left the garage in at least ten years.

On paper, the hike seemed easy. It was four miles up the trail with a 3,000 foot elevation gain, reaching a final height of 8,600 feet above sea level. The logistics of getting to Guadalupe Mountains National Park and back to Houston in one weekend were what had me the most worried … at least until we stepped on the trail.

We formulated a plan to leave Thursday after work and drive to Kerrville, then get up Friday morning and drive the rest of the way to to the park. Once there we would obtain the limited backwoods camping passes for the Guadalupe Peak Trail from the rangers, then hike up the mountain. After we set up camp, we’d hike the rest of the way up the peak to watch the sunset. Then I’d take some amazing milky way photos, maybe even do some starry sky timelapse videos before heading to bed. Then we’d wake up before dawn to hike back up to the peak to watch the sunrise before walking down the mountain to go explore other things like Carlsbad Caverns or the strange Prada store in Marfa.

Things did not go exactly as planned.

We did leave Thursday night, and we did make it to Kerrville. 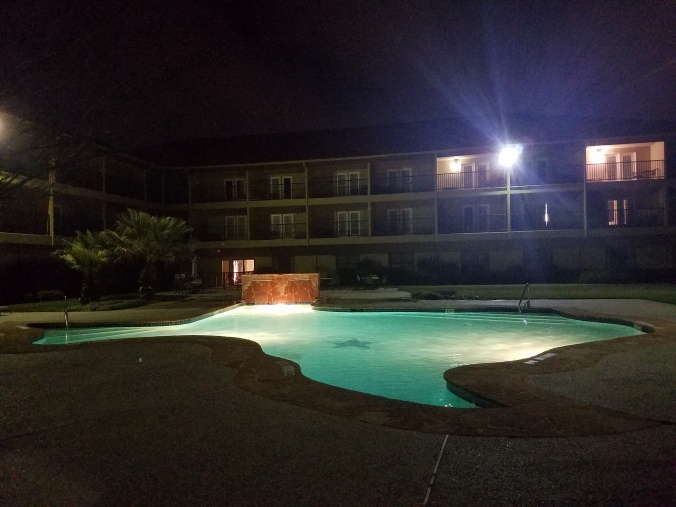 The Holiday Inn Express had a fancy Texas-shaped pool. Unfortunately it was far too cold and late in the evening to try it out. The next morning we were back on the road.

We made it to Guadalupe Mountains National Park around 1 p.m. and were very lucky to snag one of the few remaining backwoods camping permits. We unloaded our gear and headed up the mountain.

I’d done a fair amount of backpacking when I was in the Boy Scouts, and I was lucky that I still had my gear. However, nobody else had really tried out their packs, some of which had been procured through eBay, so everyone was starting the hike with discomfort.

I also didn’t have time to open each person’s pack and ruthlessly throw all their belongings back in the car saying, “Nope, can’t take this,” like the guides and counselors did to me back in the old days. No deodorant. No extra batteries. Not even a toothbrush unless you break off the handle. What’s worse is I didn’t even follow my own rules and packed in two camera bodies, three lenses and a tripod in anticipation of all the amazing photography I was going to do. (So glad I brought a tripod for this …) 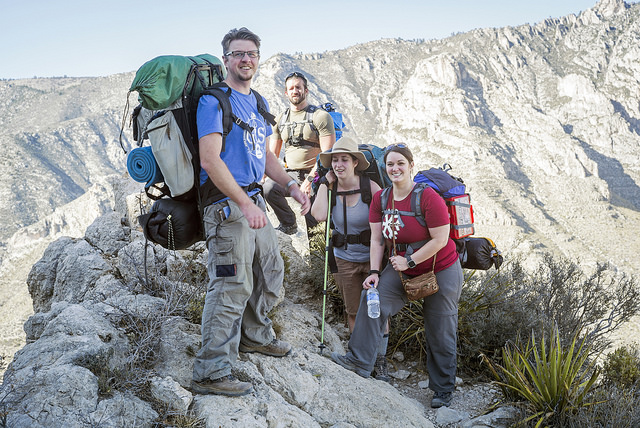 Let’s just say it was a very long hike up the mountain.

We stopped to rest often.

We really should have paid attention to the fact that the trail was marked strenuous. 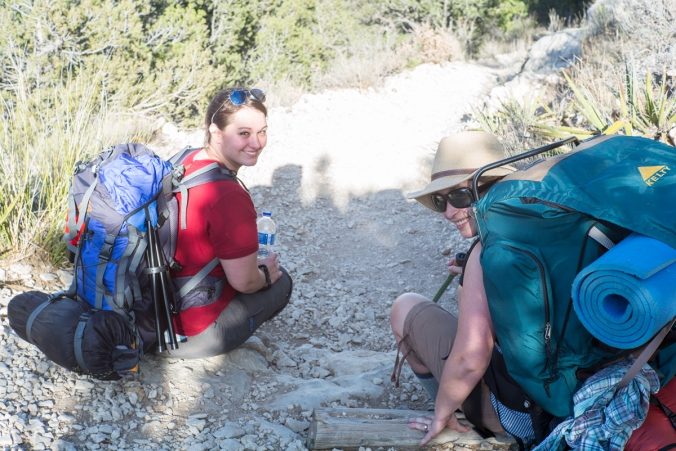 Although we made sure to find plenty of photo ops. 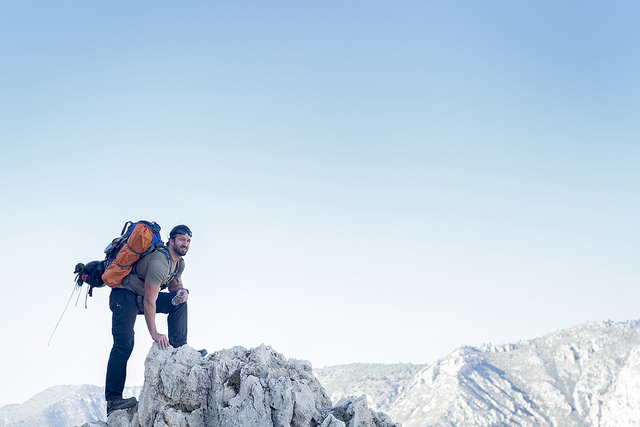 Five and a half hours later, we finally reached the sign for the camping area.

Unfortunately that arrow on the sign doesn’t actually point in the right direction. The trail is off to the right of the sign, so the girls took a break while TJ and I wandered the mountain looking for any sign of a camp. 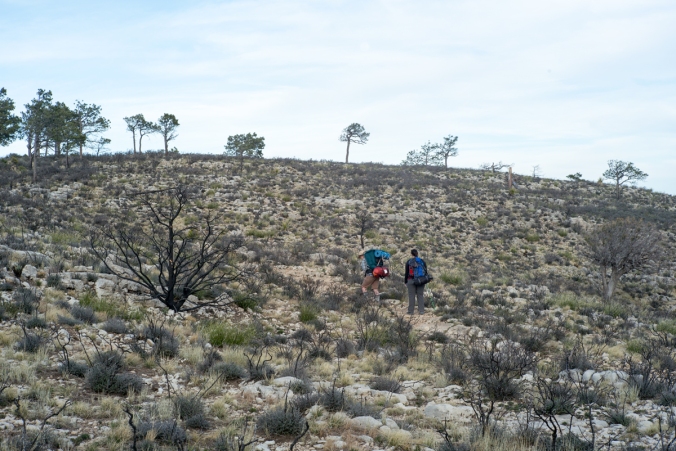 It turned out to be just over the ridge of lower peak, so we made the last march of day into the camping area and set up our tents.

We started cooking dinner just as the sun was setting. No, we weren’t going to be able to watch sunset from the peak, but there were times throughout the day when we weren’t sure we were even going to make it as far as we had.

As I set up my cameras to capture some stars, the brightest full moon I’ve ever seen rose into the sky. I thought it made the night look a bit unique, so I set up a timelapse anyway. Then, since the moon hadn’t been able to dissuade me, the clouds moved in as mother nature had a good laugh about the fact that I’d carried all that camera equipment for nothing.

The weather in the desert makes massive shifts between day and night, so we all layered up to fight the cold. The dehydrated food never tasted so good. Our friends passed around a flask, and we all took a nip of Scotch before climbing into sleeping bags and quickly falling into a deep, black sleep.

Around 2 a.m. the wind had picked up to better than 25 miles per hour. It had been impossible to drive stakes into the hard ground where we were camping, so Mary sent me out with rope to tie the tent down to whatever rocks and trees were within reach. The moon loomed over me, lighting the work. I never even had to turn on the flashlight.

We slept through sunrise. 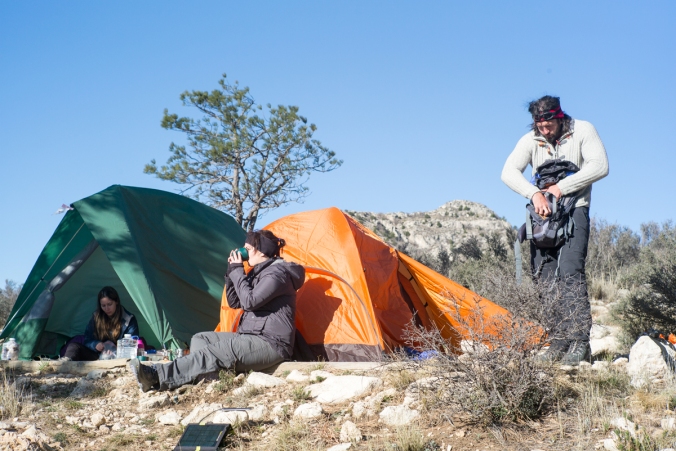 The dehydrated egg scramble had never tasted so good, and spirits were high as we knew we didn’t have to carry our backpacks up to the peak. 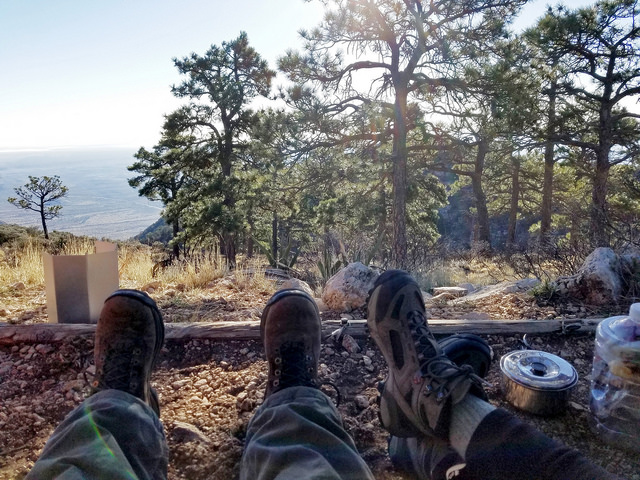 Yes, we’d missed the sunrise, but it would still be a nice hike.

I packed some water and my camera into a sleeping bag stuff sack, slung it over my shoulder, and we headed for the top. 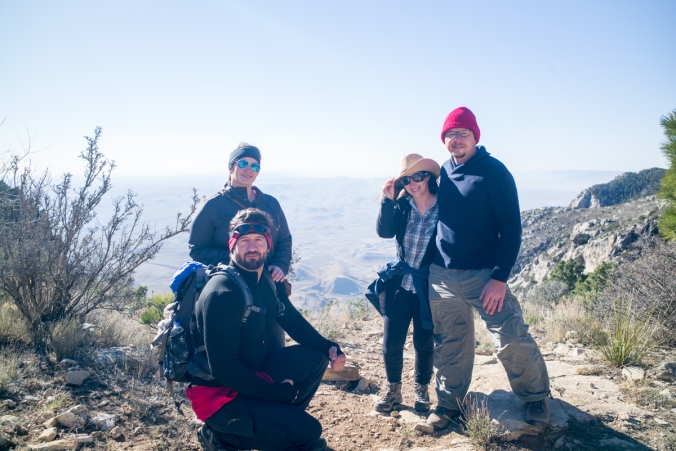 The last mile was full of beautiful scenes. We couldn’t get enough photos, but even without packs, everyone was still having a bit of a struggle. 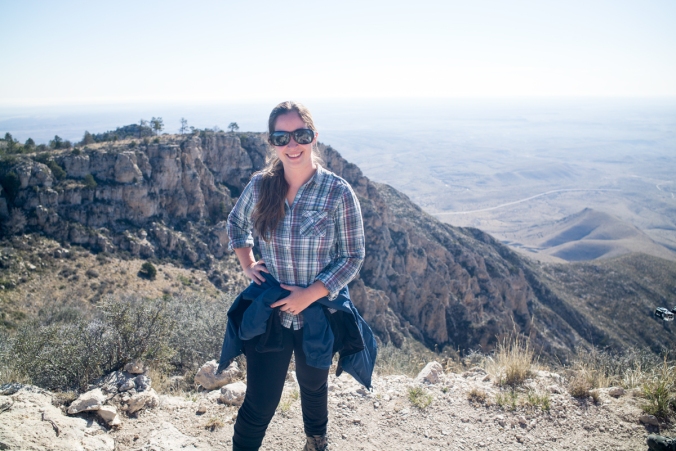 Once we passed El Capitan, we knew we were almost there.

A few portions of the trail crossed steep rock face, which had Mary crabwalking, but she overcame her fear of heights to cross them.

Despite various threats of quitting, we all made it to the tallest point in Texas together.

Inside the ammunition box at the base of the monument was a log book, signed by all who make the hike. Some people put serious thought into what they write. The book is full of poetry and quotes. We added our own signatures to the pages. 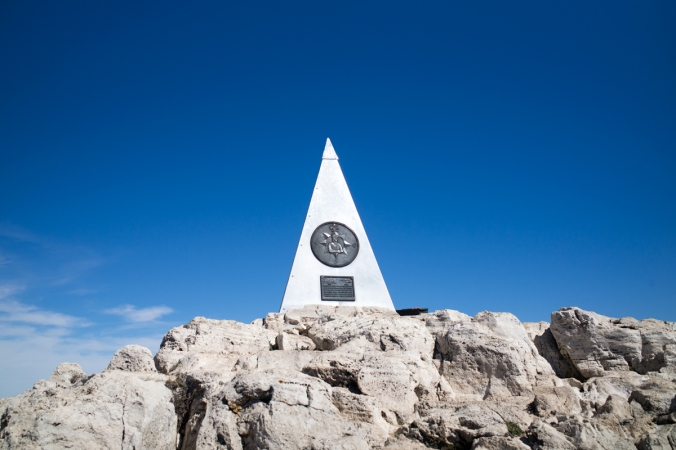 Had we had more time, water and a permit, I think everyone would have been content to stay another night before breaking camp and hiking down the mountain, but we didn’t have that luxury. We made a quick lunch and then reluctantly put on our backpacks.

Mary had a sore knee, so it was slow going. Even so, it only took us about two hours to get down the hill — a marked improvement compared to our ascent.

I left my pack with everyone at the base of the trail and hiked over to the ranger station to get the car. Everyone was very excited to sit down.

We drove to Van Horn and celebrated our achievement with dinner and drinks at the El Capitan Hotel.

We made the long drive back the Houston Sunday with one question in mind, what mountain do we conquer next? 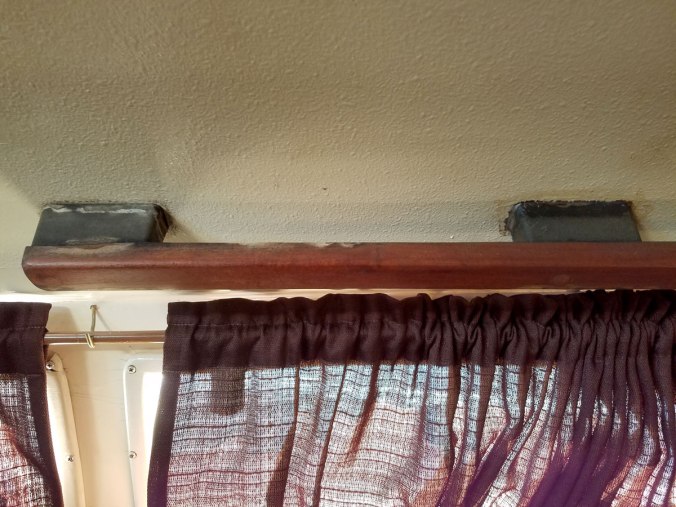 I was in my favorite seat in the boat when I thought I felt something on my head. I looked up just in time to feel a very cold drip down my neck.

Last year we had replaced the two large cabin windows, but it was time to chase leaks again. This time we had water coming through the handrails on the ceiling, so we swore we’d actually commit a nice weekend or two for repairs rather than just sailing around while our boat continued to leak.

I wasn’t excited about dealing with all the wood plugs that were hiding the screws, but there was nothing to do except start drilling.

Our rails were through-bolted from the inside of the cabin to the rails on the cabin top with the screw heads inside and the nuts outside.

Unfortunately after 35 years, most of these screws didn’t want to budge. We managed to break about half of them loose, but then I had to deal with the tedious process of drilling the heads of the other half.

After much longer than expected, we finally managed to get the rails loose.

I made a trip to West Marine for new hardware, but of course the screws weren’t a standard length, so I had to buy longer ones. Meanwhile Mary was sanding the rails to clean them up. When I got back we gooped up the holes and started bolting everything back together.

In retrospect I wish I had taken the time to paint the black spacers while the rail was off, but it never crossed my mind until we had it back on the boat.

The interior rails had the screw heads, so it was easy to get those holes plugged and leveled. We then rubbed the rail with teak oil, and it was looking pretty good. 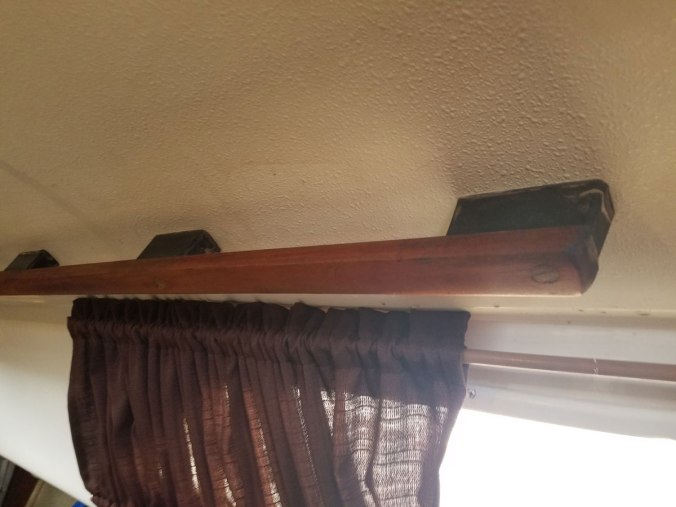 On the exterior I had to grind the extra length off all the screws, which wasn’t as terrible a job as I thought it would be. It took about 30 minutes to get all of the screws cut down. Then I started tapping in plugs. 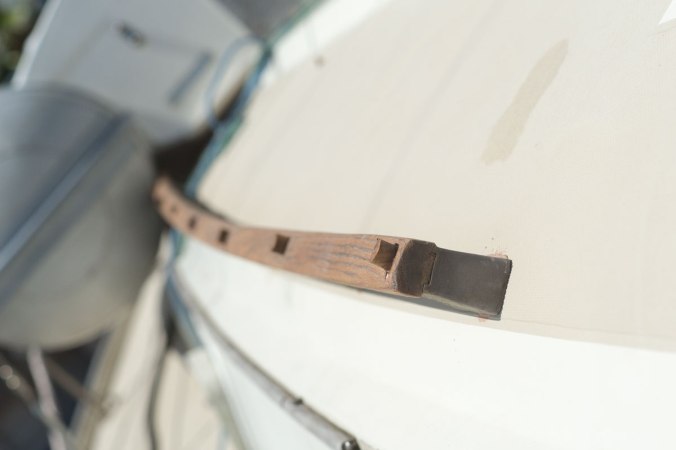 This was my first time to use plugs, so it wasn’t a flawless operation. I chiseled them down and then sanded them level, but I had two or three that split wrong or came apart and had to be redone.

Finally, I got it all sanded smooth and added another layer of teak oil.

You would think that would have been enough leak fixing for the year, but we also finally tackled the broken opening port in the V-berth. When we bought the boat fit came with a tupperware container under that window to catch the water. A year ago we bought a replacement window. I guess after four years it was finally time to do something about it. 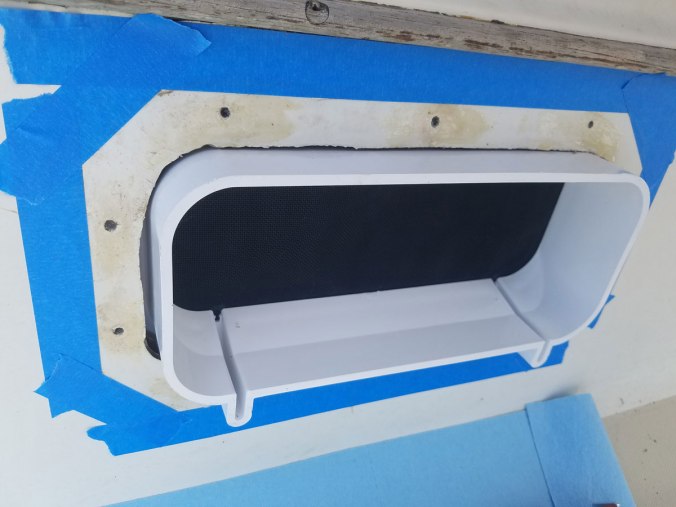 The new window was the same size, but the interior screw holes weren’t in the same places, and the exterior trim had no holes at all.

There was a long debate whether or not to drill holes in the new trim to make it match the old trim rings, but it was finally decided to mount it with sealant only the way we had mounted the fixed ports. If we really need it to match we can always glue screw heads on the trim.

On top of all that work, Mary also sanded and oiled the companionway as a bonus project.

The good news is we’ve got no leaks from the re-bedded rails or the new window. 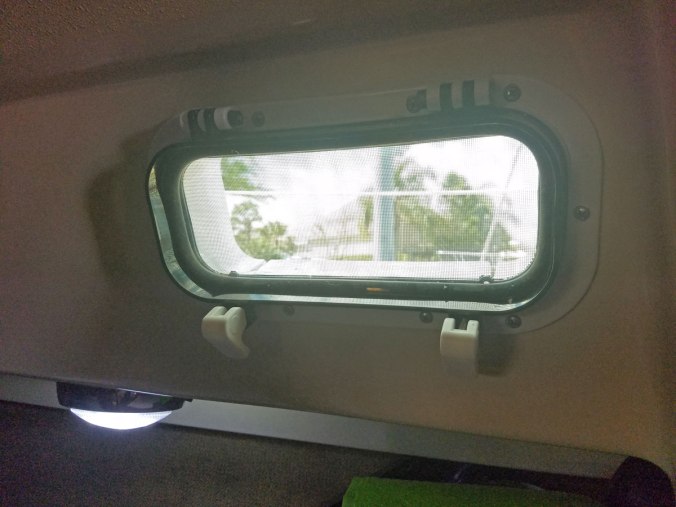 The bad news is that our mast is leaking again. Guess we’ll tackle that next year because I need to do some sailing.