I’ve never really understood having eyebrow rails on boats. Does it make them more expressive? Ours just seemed to catch dirt then get broken when people slid off the cabin top and caught their feet on them.

Within weeks of buying Gimme Shelter, a section of our starboard eyebrow rail had snapped off. Then another and another. By the time we rang in 2017, we were missing several sections of the trim on both sides of the boat.

Since O’day has been out of business for decades, there were no readily available replacement eyebrow rails. I had a discolored strip of gel coat with exposed screws sticking out that needed to be addressed.

From the beginning I knew I didn’t want to use screws to install the replacement. I looked into buying teak boards and cutting my own, but it was expensive, and I wasn’t sure how it would turn out. I looked into PlasDeck and NuTeak to see if they could replicate the originals for me, but they said they would have to make the rails wider and the plastic would require screws because an adhesive wouldn’t stick to it. I even thought about skipping the teak altogether and just putting a blue pinstripe on the cabin to cover up the stain.

It was by pure coincidence that the local boaters resale shop happened to have a set of never-installed eyebrow rails for a Catalina 34 for $99. (They’re $203 from CatalinaDirect.com.) The O’day rails were 14’4″ while the Catalina rails are only 14′, but they were pretty similar.

I removed all the screws, filled the holes with epoxy, and stuck the new eyebrow rails on with 3M emblem adhesive — the same stuff I used to replace the fixed ports. 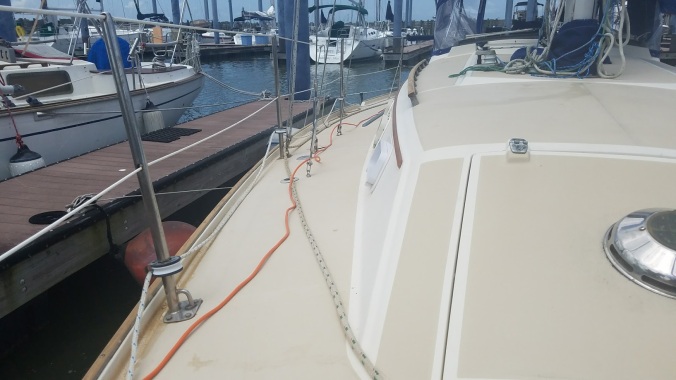 The entire project was painless, which was such a relief after the nightmare of our heat exchanger replacement. 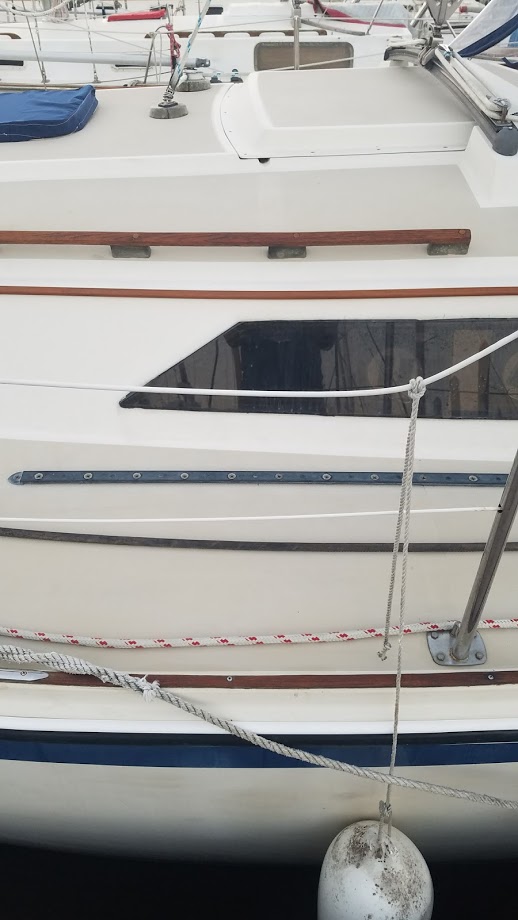 The only downside was that the new eyebrow rails made our hand rails and toe rails look terrible. We spent the entire next day sanding them down and oiling them to make them match.