Gimme Shelter arrived with the original winches from 1982, shiny stainless Barlow 25s. They glimmered with the reflection of the ocean as the waves rolled by.

Unfortunately their shininess couldn’t make up for a few shortcomings.

I did quite a bit of research regarding how I could possibly get the winches off undamaged, but after two weekends of waiting on penetrating oil and trying different things, I ended up breaking the head off one set screw. At that point I just decided to dremel grooves into the bottom of the bolts on the other winch, so that I could hold each mounting screw still with a flathead screwdriver from below while I used an end wrench to unscrew the nuts. 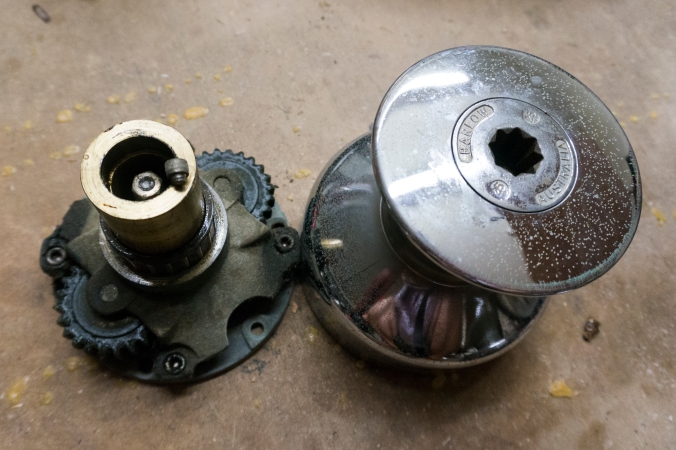 During my struggle with the Barlows I ran across these gorgeous Lewmar 44 self-tailing winches at the local Boater’s Resale Shop, and on an impulse decided to upgrade. I mean, combined they were less than the price of one new Lewmar 44, how could I pass that up?

I’ll admit I should have done more research before pulling the trigger on the bargain. The six allen screws in the top mean these are “spring jaw” Lewmar 44STs, which are also no longer made and no longer have parts available. I kicked myself for replacing one obsolete part with another obsolete part. However, I kept reminding myself that good winches can last 40 or 50 years, so surely they still had plenty of life in them before I’d end up hunting for some discontinued gear or pawl.

I thought they would work just like all other Lewmar winches and come apart after I removed the allen screws in the top. I was wrong. I took out the screws and nothing budged. I was delayed again as I searched for a way to disassemble Lewmar 44ST Spring Jaw Winches without them ending up in the same condition as the Barlows.

Thankfully, the kind people at Lewmar were extremely responsive and in less than 24 hours of sending my inquiry, they sent me back a PDF of the original Lewmar 44ST Spring Jaw Self Tailing winch instructions, which I am sharing here for anyone else wondering how in the world to take these apart: https://drive.google.com/open?id=0B-eqti4pjMLTRGw5cE9FMHFoOU1OczFKcURaX3dIdGdfeFFn&authuser=0

The key is to use a rubber mallet to tap the tailing arm in a counter clockwise direction until the entire top of the winch knocks loose. Then remove the six allen screws. Then the interior ring just screws off. It’s very easy once you know how to do it.

While I was fighting with the winches I was also mixing up thickened epoxy and filling in the old winch holes as well as injecting epoxy into the cracks.

By the way, the Barlow winches actually had six holes, but Oday only bothered to put in five screws. I’m at a loss when it comes to the decisions boat builders make.

I also made new backing boards out of 1″ oak planks. In the past I’ve used star board, but I already had the oak left over from another project, so I went with that. I also bought all new stainless hardware to make sure I had six bolts for each side that were long enough to fit through the backing boards.

I drilled the six new holes two bit sizes larger than required, then filled those holes with thickened epoxy. I then re-drilled through the epoxy with the correct bit size, so that if my bedding of 5200 under the winches ever leaked, I wouldn’t end up with any water penetration at the holes.

Unfortunately I forgot to take a photo with the six holes drilled, filled and re-drilled because at that point of the project I was either covered in epoxy or just trying to get it finished.

The port backing plate, which is located in the lazarette, went on with no issues, but I had to cut the starboard backing plate in half to make it fit through the small access hole in the ceiling of the aft berth.

I won’t go into the details of how we installed the new winches with Mary working the screwdriver from the cockpit while I held up the backing plates and worked a ratchet in a contorted position from the bowels of the ship, but eventually the winches were mounted, and our marriage has survived.

We now have the largest self-tailing winches compatible with our line size. After using them sailing to Port Bolivar last weekend Mary’s review was, “This is a lot easier.”

Worth every penny — even if they are discontinued.

Well, after sitting in the rain all weekend waiting for a chance to work on the boat, I finally made some progress on the winch replacement this morning. A star-headed screwdriver and vice grips finally gave me enough torque to break the set screw.

I wish I meant break it loose. Unfortunately I mean I broke the head off of it.

Once the head of the bolt snapped, the Barlow 25 came apart quite easily. Mary worked the deck side of the screws while I went below with a ratchet, and we had it removed pretty quickly.

Instead of fighting the set screw in the port winch I decided to try removing the nuts from the bottom first. Magically, I was able to get all five off, so the port winch is still intact, but not serviceable. I think I’m going to have to spend a couple hours this week drilling out the set screws and re-threading the center of both winches, so we can sell them.

Meanwhile, I began filling the old winch holes in the deck and patching some of the cracks with thickened epoxy.

I thought I’d actually finish this project today, but then I ran into the next big hurdle. Our replacement winches are vintage Lewmar 44st spring jaw winches with six allen bolts on top. I just assumed that when I removed the six allen bolts, the winch would come apart. Wrong.

I’m stumped. I searched the internet for a diagram or service manual with no luck. I also posted on cruiserforum.com looking for help, and nobody has responded yet. Until I can figure out how to take these winches apart to drill new holes and bolt them to the deck, I’m stuck.

Anybody have an idea?

Update: Lewmar sent me the answer, and it involves a rubber mallet. I will post the instructions soon.