The sound of rain woke us before the alarm had a chance to go off, so we laid in the V-berth listening to the patter for a few minutes before getting dressed and re-packing our bags. We’d spent the night aboard Gimme Shelter as we had an early flight, and the marina was much closer to Houston Hobby than the house.

The rain made it a slow drive to the airport even on an early Saturday morning, but it made us even more excited to be escaping for a week.

Mary jumped online and reserved us a spot at WallyPark, the cheapest long-term airport parking we could find. However, when we arrived the attendant said we had to have a print-out of our reservation if we wanted credit for the deposit we had just paid online.  That was incredibly irritating. I wonder how many times they’ve made an extra $6.95 per car when drivers don’t have the printout. (We never did get our money back on that.)

The shuttle dropped us at Hobby Airport where we found lines running out the doors. I’d never seen it that backed up before. Thankfully we weren’t checking a bag, so with Southwest’s online check-in we managed to bypass all of those lines and go straight to security.

We procured what turned out to be a very mediocre pastry and some downright disappointing coffees at Peet’s, the only option in our terminal. The pan du chocolat was filled with some kind of strange chocolate pudding like a hostess snack cake. I do not recommend it.

By 10 a.m. our fellow sailors had joined us, and we grabbed some Subway sandwiches to take with us for lunch before boarding our four-hour flight.

As we took off from Houston in the pouring rain our pilot described the weather in San Juan as pleasant but gusty – a point that was accentuated by the triple-hop landing of the 737 that left several passengers clutching their arm rests all the way to the terminal.

Upon arrival we rallied at baggage claim with the rest of the crew of our boat, a Lagoon 400, as well as the crews of both the Lagoon 450 and Jenneau 469, which we chartered through Sail Caribe. One crewmate on the US Airways flight had a lost bag. (Thankfully the bag was found about an hour later and sent to the marina that night.)

The seventeen of us piled into two vans contracted through the charter company to take us from San Juan to Fajardo. However, we also needed to provision for the week, so we made a stop at Ralph’s Grocery Store where those in charge of buying groceries for each boat took to the aisles while those heading to the marina made a quick beer run. 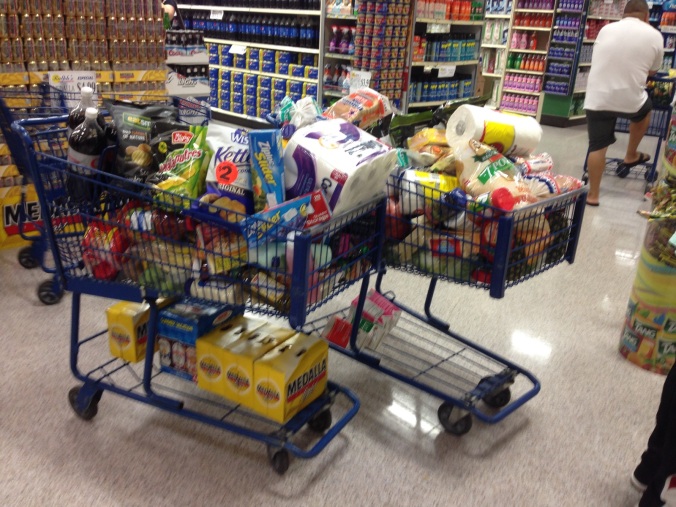 Then the vans dropped us at the marina before returning to go pick up the grocery shoppers. 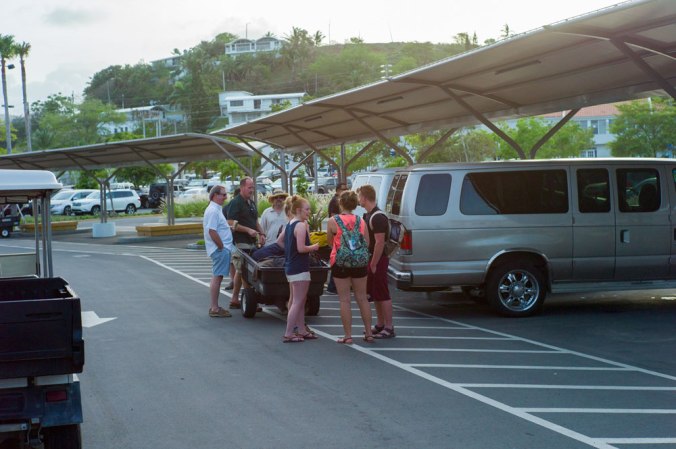 My first glimpse of Puerto Del Rey was overwhelming. It was the biggest marina I’d ever seen. In fact, it’s allegedly the largest working marina in the Caribbean.  We were greeted by marina staff and provided with cart service to take us and the bags to our boats – Caicu, Batubara, and Chateau de Mer. 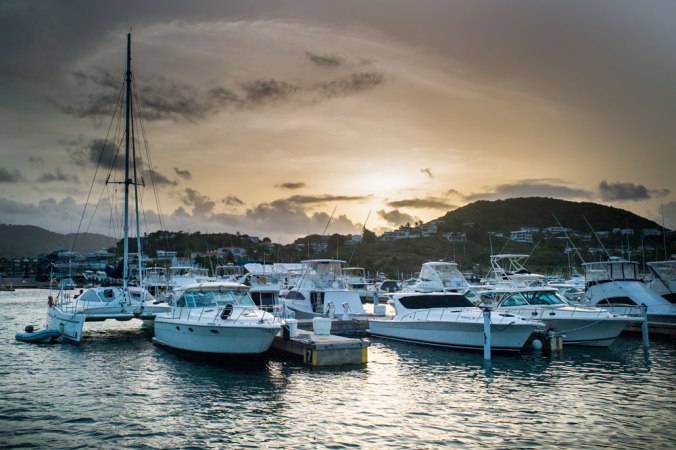 The cart service is great if you’re riding in the cart, but it’s a little scary when you’re just walking the docks because they drive quite fast.

Graham, the representative for Sail Caribe met us on the pier and showed us to our boats. We then got busy exploring every nook, cranny, feature and system of the vessels while we cracked open a few beers to celebrate the beginning of vacation. 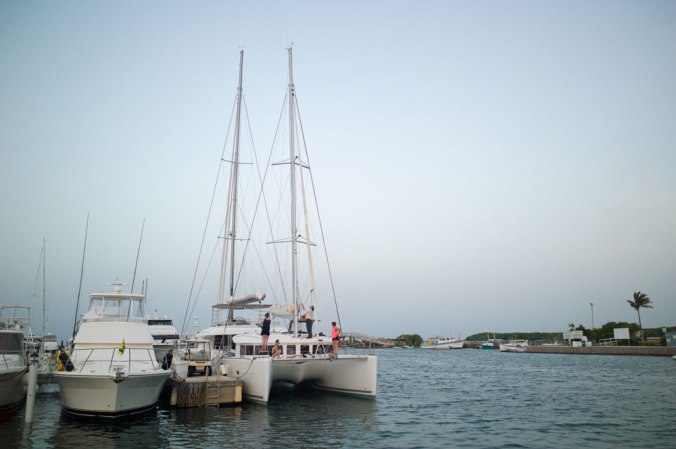 Meanwhile, Mary was still at the grocery store getting an introduction to “island time.” Finding everything on the shopping list took forever, and from what I understand, checking out took even longer. However, she finally arrived to the marina, and we helped unload groceries into the refrigerator and dry storage. 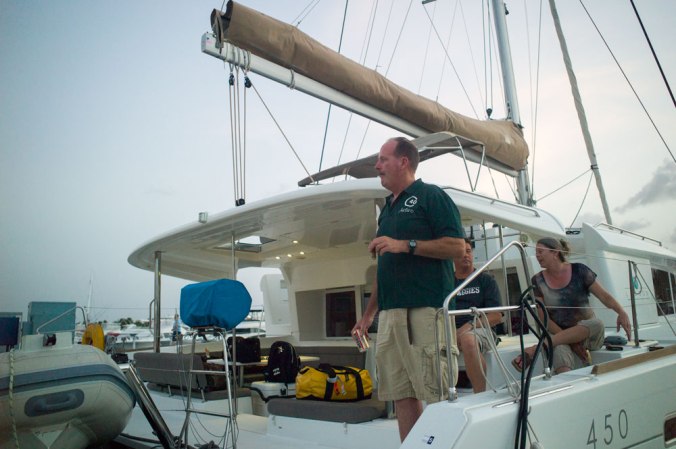 Once the food had been stowed and everyone was settled, we walked up to the marina restaurant for a late dinner. We quickly found that there was nothing quick about the restaurant. Wait service was slow. The kitchen was even slower. Dinner turned into a two-and-a-half hour ordeal. However, everyone remained gracious and spirits were high because the real adventure was just about to begin. 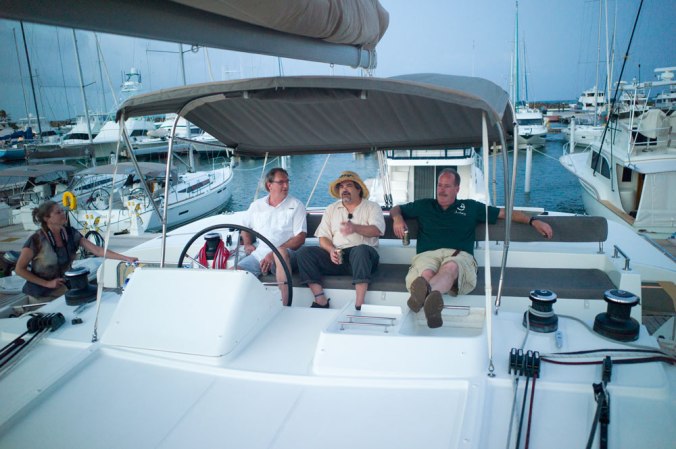 Have you ever been strolling the beach and suddenly said, “What the heck is THAT?”

During our Christmas trip to Florida, we made a stop at Bald Point State Park, and as we hiked up and down the beach, we came across this thing, and that is exactly what we said. 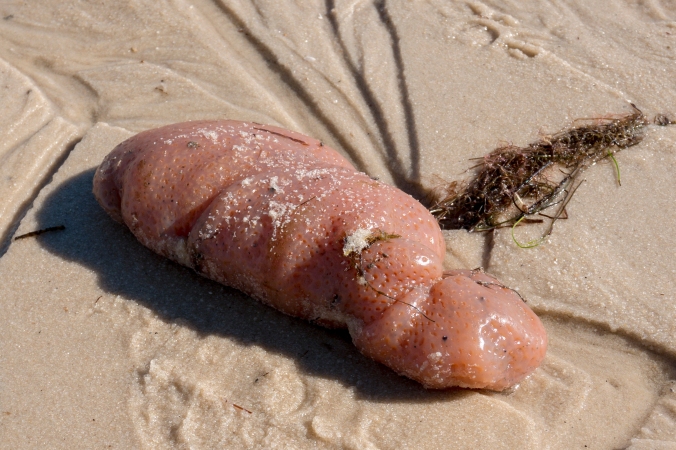 We did all the usual scientific testing, you know, nudging it with our toes, poking it, nudging it again, and I think someone even sniffed it. We still had no idea until we spent an hour on Google.

The strange blobs all over the beach weren’t aliens, whale organs or any of the other interesting guesses our Facebook friends made. They’re called Tunicates, and they’re invertebrate marine filter feeders, more commonly known as sea squirts, sea pork, sea livers, or sea tulips.

Some tunicates, like the sea pineapple, are even edible. But would you eat this? 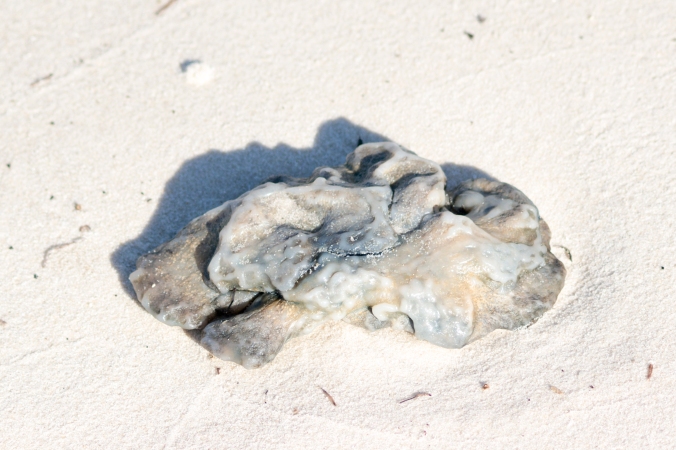 These particular tunicates got the nickname sea pork because after death, the rubbery tunic bleaches to white resembling salt pork or fatback. 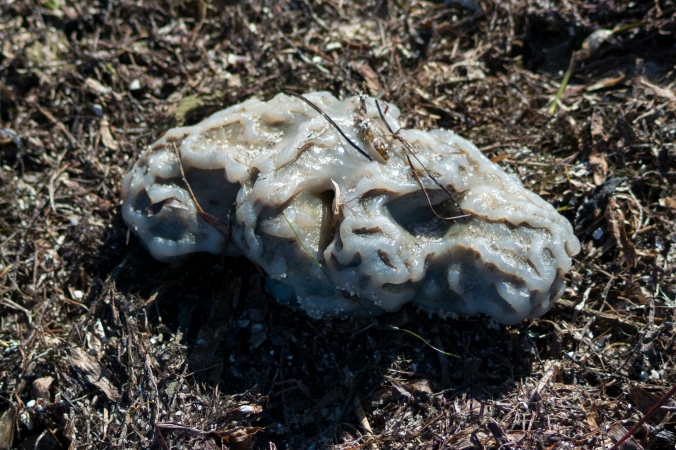 So next time your friends say, “What the heck is that thing?”, you can tell them.