For the first time in a long time, we left Galveston Bay for a trip west on the ICW to Harborwalk Marina in Hitchcock, Texas.

We visited Harborwalk four years ago, and the entire trip left a terrible taste in our mouths. Our engine overheated, the head backed up, the air-conditioning quit, the mosquitoes were unbearable, and drunk fishermen kept pulling up to the restaurant dock and revving their engines and blaring music all night. Then to top that all off, when we went to the pool in the morning a security guard escorted us out because we weren’t wearing Harborwalk wristbands despite having prepaid for our slip but arriving after the office had closed the night before.

Thankfully, this trip was better.

It was an easy six-hour cruise from Kemah to Harborwalk with only a short delay at the Galveston Causeway Railroad Bridge. Entering the marina we were careful to stay in the center of the channel, but there was a still a section that read 5′ on depth finder. Definitely don’t cut the corners in and out of the channel because on Sunday a sailboat got stuck exiting too close to the bulkhead.

We had reserved eight slips for the weekend at a flat rate of $50 per night. They were not charging by the size of boat or the size of the slip.

Apparently Harborwalk turned on power to the first eight transient slips. Unfortunately, one of the power poles was shorting out and fried the surge protectors in our friends’ boat. That scooted everyone down a slip. That meant the boat on the end had no power and despite getting called by 6 p.m. Friday night about the issue, the marina didn’t bother to respond and come flip the breaker on for that slip until Saturday morning.

While it was still a little too cold to swim, we took advantage of Harborwalk’s beautiful pool area to hang out and play a few rounds of cornhole. There was no longer a security guard throwing people out, but there’s also no longer a pool bar or restaurant. We heard rumors the marina was signing a lease deal with a new restaurant this week. (Take that rumor with a grain of salt because we kept hearing Watergate would have a new restuarant open in three months every three months for three years before Opus Ocean Grille finally moved in.)

The lack of restuarant and bar definitely cut down on the loud small boat traffic, which made for beautiful, peaceful evenings, and although we didn’t try any, our friends said the food at the ship store was great.

We got to witness a gorgeous blue moon Saturday night. 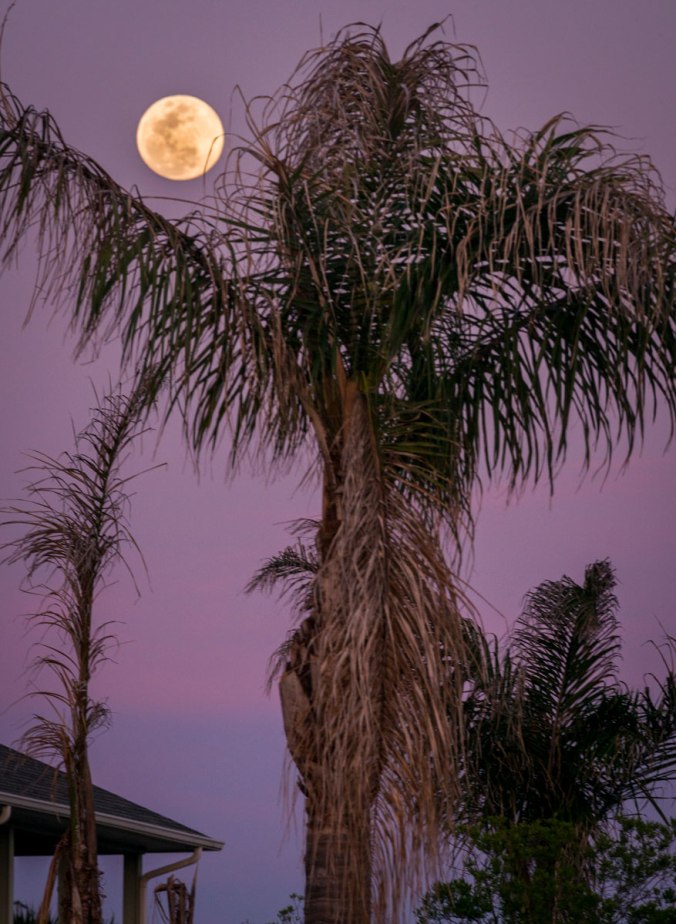 Unfortunately the mosquitoes were just as bad as they had been on our previous visit. The marina is surrounded by swampland, so make sure and bring plenty of spray. 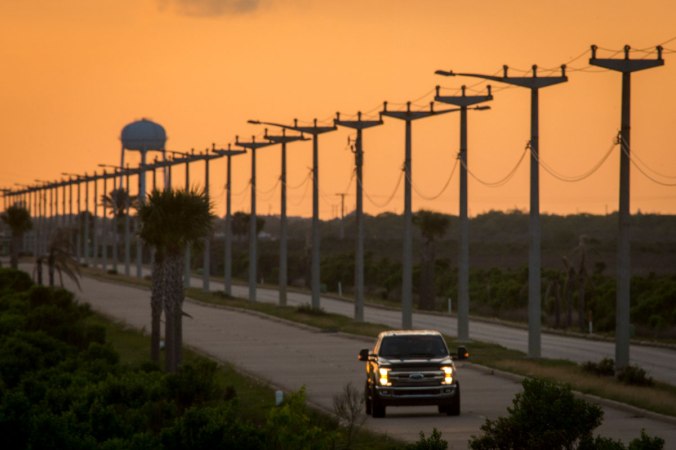 However, the clear view out over the swap made for some great sunsets. It looked like a giant Easter egg on the horizon.

There was one other strange incident worth mentioning in regard to our visit. There was a crab trap in the water near the transient docks with a dead, bloated otter inside it. It was unclear as to whether the otter somehow crawled inside, got trapped and drowned or if it was stuffed inside and left there. Either way, it was pretty gross.

While the facilities are gorgeous, Harborwalk still has some work to do to become a great marina.

This Marina is located in Freeport, Texas on the ICW, just east of the 332 Surfside Bridge. The bridge height is not listed on charts but clearance was no problem for our O’Day 34 or the Pearson 422 that was with us.

Bridge Harbor Yacht Club has made a huge number of improvements in the past three years. The marina has a full service fuel dock with both diesel and gas. There is a small ship’s store that is open regular hours and sells all the basic boater needs. The store also has a welcoming crew of four beautiful parrots who are an attraction all to themselves.

There is also a large beautiful restaurant in the main building. We didn’t get a chance to eat here because of our late arrival, but I have heard the burgers are the best in Freeport.

Attached to the restaurant is a small pool with a swim-up pool bar and several tables.

Currently they do not have a liquor license, but the bar should be opening soon. There is also another pool as well as tennis courts overlooking the water near the adjoining condos, which are partially owned by BHYC. 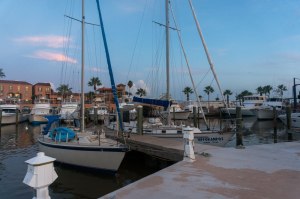 Restrooms were clean and very close to the transient docks, and the owners and crew at the marina were very friendly and helpful. Reservations were simple to make, and there was no trouble getting a slip during Labor Day weekend. I think this place will really draw a crowd next summer, as this marina is really going to be very nice and finished by then.

The only issue we found is that there is very limited dog walking space.

We left Laguna Harbor at 7:15 a.m. It took us a couple hours to navigate past Galveston Island and past the jetties out into the Gulf of Mexico. By the time you get past the jetties in Galveston you are already about three miles out, and a decent distance from land. We stayed on this line pretty much the whole way. 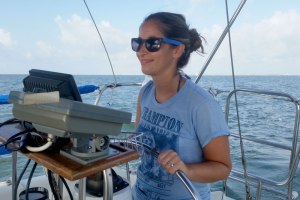 This is me happily steering before I got a taste of the real ocean.

I was helming the boat, and I was terrified.  My eyes were just going from the charts, to the wind direction, to the other boats, to the waves cycling quickly and continuously, taking it all in.  As I made the turn out of the ship channel and around the jetties Fred is second guessing everything.  “Are you sure it’s deep enough?  We are very close to the shore.”  I don’t blame him for one second, but I was so intensely calculating every possible variable that his thinking I would run us aground was infuriating. 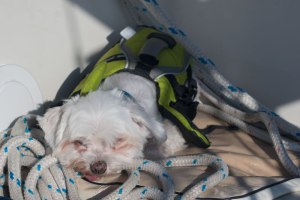 Turning onto our course the wind direction was not the broad reach we had been promised but instead a 45-50 degree close haul with winds at about 10 knots.  We were tipping a bit, and the waves seemed so big on our sides.  Ever so gradually I got better and better. For the first 15 minutes I could not let go of the wheel, not even to take a drink. After 30 minutes or so I was comfortable with both sails and the engine off. It wasn’t until about an hour after we set sail though that I was comfortable enough for Fred to stop steering and turn on the autopilot. I just don’t trust that thing. 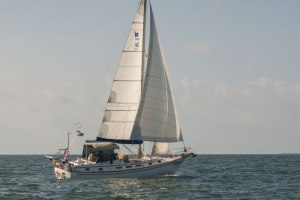 This is Hippokampos speeding off as Fred tries to coax me into putting the jib up.

Even though we were only about 3 miles offshore I put on my PFD and kept it on the entire time. I also made the dogs wear their life jackets for the first couple hours, but when the winds started to die, and the dogs were more likely to die of heat stroke than drowning, I let them take them off. 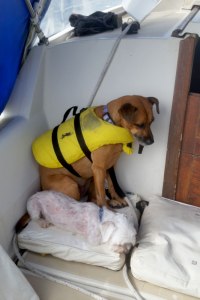 A few hours into the trip we got hit by a small squall.  We weren’t sure what to expect, so we were at ready to reef the sails.  Not knowing how much wind might be coming, we decided to go ahead and reef. Fred went up to the fore deck, and knowing I was already scared, decided to go ahead and put a double reef in. That’s when we found out that our second reefing point doesn’t actually reach our boom, and therefore does nothing. So we just decided to take down the main sail all together. Good to know! The wind didn’t end up getting any faster than 12 knots, the rain only lasted a few minutes, and before we knew it we were putting the sails back up.

Taking sails up and down turned out to be a real trend for the trip.  As the winds continued to diminish, we slowly saw our projected arrival time on the chart plotter creep to midnight, and then 1 a.m. We knew we had to switch on the motor. Thanks to our wind direction indicator we know that with wind at least 30 degrees off the nose, we can motor sail no problem, but anything closer than that and our jib is flapping wildly. With winds shifting off our nose we were furling and unfurling the jib frequently trying to maximize our speed.

Tex had zero issues with our slow rolling speed.

We ended up at the Freeport jetties around 6:30, making our time offshore a little over 8 hours. We went right past the Freeport LNG terminal where Fred made one of his first corporate documentary videos and where he hosted Magnum Photographer Jean Guamy back in 2007. (Confession, I’ve never seen the video or the photos.) 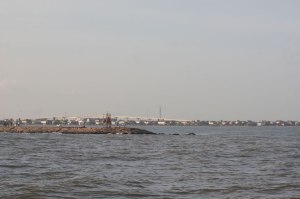 We had reserved slips at Bridge Harbor Yacht Club, and it was only a short trip down the ICW, and under the bridge to get there.

After some vague directions, and no slip or pier number we were very happy to see BHYC’s team waiting for us in bright shirts to help us dock right out front.

We were tied up on the finger pier at 7:15 p.m. making it exactly a 12-hour trip. After a few drinks and some delicious food some of us were falling asleep at the dinner table. It had been a long day full of firsts. Longest sail, first time offshore, Andy and Jayne’s first time making a long trip just the two of them on this boat, first time in Freeport, and first time being checked in by a parrot.