The first warm-weather long holiday weekend of the year is upon us. The lakes and bays are going to be absolutely packed with people who have not operated their boats since the fall.

“You know what, Cousin Grandpa … we should take the boat out!”

This influx of boating activity also brings heightened activity by the US Coast Guard, Texas Parks & Wildlife, Galveston County Sheriff’s Office, the Seabrook Police Department, and any other government body in the area with boats and ticket writing authority. 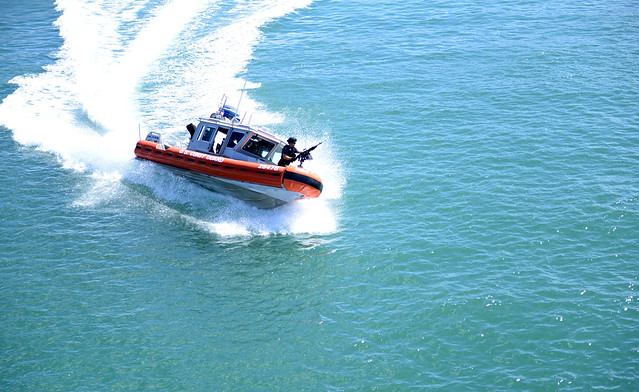 Expect to see up to six boats from various departments patrolling the no-wake zone of the Kemah channel initiating stops for the following:

Usually if you have remedied the above bullets, you can avoid being stopped, but I’m no stranger to boardings. During my ASA 101 Basic Keelboat class we were stopped, boarded and the instructor was ticketed by Texas Parks and Wildlife for having an expired registration sticker. Then, the next July 4th when I finally had the Seahorse running, I was boarded by the Coast Guard because my bow light lens was on upside down. (Oops!) Thankfully they just let me switch the lens around and sent me on my way.

However, once you’ve been boarded you will definitely get a complete Vessel Safety Check. Expect the officers to go through your boat from top to bottom to make sure you are meeting the minimum safety requirements.

Here is the checklist they use to perform vessel safety inspections.

If the checklist is too hard to understand, you can try this online Virtual Vessel Examiner to see if you meet the standards.

In the Kemah area it seems like the checks focus on lifejackets, a throwable PFD, a horn, a first aid kit, making sure flares and fire extinguishers have not expired, the pollution/no discharge placards, and making sure your holding tank through hull is locked or wired shut.

And remember, getting a ticket sucks, but the guys out on patrol are not the enemy. They are the ones coming to save your ass when something like this occurs.

When we purchased Gimme Shelter, she did not have an anchor light. The previous owner had been hanging a small light off the backstay. After a few close calls with some not-so-smart boaters while anchored out to watch fireworks last summer, I decided the backstay light was not hacking it. (Yes, I said last summer. You can’t rush these projects when there’s important things to do like sailing, drinking and playing music.)

Many months ago our friend Rene had donated this Seasense LED anchor light he had left over after a project on his Morgan. Many thanks, Rene!

This weekend it was finally warm enough to tackle the job. However, first I had to do some investigation and answer some important questions like, where did the anchor light switch and wiring go? I wasn’t sure if I was going to have to run all new wire or not.

Gimme Shelter came with a “solar charger.” Basically there was a huge 15 watt panel in the aft berth with a 12v DC plug. If you carried the giant, outdated panel outside and plugged it into the 12v socket in the binnacle, then flipped that “solar charger” switch, the panel would ever-so-slightly feed the batteries. I decided the “solar charger” switch was probably a good place to start looking for anchor light clues.

Yep, under the solar charger label was the anchor light switch. However, it obviously was no longer wired to the anchor light, so the investigation had to move behind the panel.

What a mess?! However, almost all the wires still had their tiny factory label ring on them. I found two red wires that were no longer hooked to anything. One was labeled “G” and one was labeled “5”. The wire going to the steaming light was labeled “4”, so I took a gamble and hooked wire “5” to the anchor light switch and flipped it on. Suddenly I had 12 volts  running to the wiring plug at the base of the mast! (I still don’t know where the “G” wire leads.)

The anchor light wires were still attached to the plug and running up the mast, but we had no idea if they still made it all the way to the top, and there was only one way to find out. It was time to put on the harness and head up the beanstalk.

Since Mary doesn’t have the strength to crank me up the mast, and she doesn’t care for heights, we invested in a MastMate. It’s a nylon ladder that connects to the main halyard and runs up the sail track. I still wear a harness and connect the topping lift to my harness just in case, but it makes going up and down much easier. Mary just takes up or lets out slack and ties me off instead of having to crank me up.

I was greeted at the top with a disturbing sight.

A lizard was literally impaled on the end of the windex. How does that even happen?

I’d taken up a bag of tools, so I went to work unscrewing the cap to the top of the mast. However, once unscrewed the top wouldn’t budge. I had to retreat down the mast to find a pry bar.

Once back up the mast with the biggest screwdriver in the box, I did manage to pop the top and found this.

Can anyone enlighten me as to why there are two sheaves in the middle of the mast? If they had been the same size as the sheaves in front I would have switched them out, so I could run a second jib halyard, but they weren’t quite the same size. I lifted them out and began searching for the anchor light wires.

Hallelujah, the wires were still there. After spending what felt like an eternity balanced on one foot reaching down the mast with a long pair of needlenose pliers I finally grabbed them and was able to slide them back up to the top. I then clamped a set of vice grips on them, so they wouldn’t fall back down the mast. After trimming and stripping the ends, the multimeter verified that I had 12 volts at the top of the mast. (I was astounded because boat projects never go this way.)

At this point I needed to take another break, so I left the vice grips holding the wires and climbed back down with the mast cap. I decided the easiest plan of action was to mount the light to the cap on the ground, then take it all back up as one piece for installation.

In the perfect world I would have cleaned and repainted the cap, but even though this project was going surprisingly well, I was still running out of daylight, and I needed to get everything back together before heading home.

For the third time I climbed the mast. I crimped the wires together, taped it all up, released the vice grips and screwed the top back into place.

And just as I leaned back to bask in the glory of my flawless victory, I broke off the windex!

I wasn’t too upset. I mean, there was a dead lizard stuck on it anyway.

I ended the day with only one injury. Somehow I gave myself a blood blister on my pinkie – no idea how.

It felt so good to finally scratch the anchor light off our work list (even though I had to pencil in “replace windex” at the bottom). I was amazed that we never even had to make a trip to West Marine! I don’t know if that means we’re getting better at projects or that we got really lucky this time.

As we took one last walk with the dogs before sunset, I could see our new anchor light shining proudly across the marina. (Our mast is the tiny one right in the middle of the photo. And by shining proudly, I mean, I could barely see it because it was still daylight, but it was definitely on, so that counts.)

We finally have all of our lights functioning. Hopefully we will spend many nights anchored out this year.