Happy new year and welcome to 2017. I hope all of our readers made it, unlike all those celebrities that didn’t.

I haven’t had time to write anything new for the new year, so I thought I’d kick things off with a photographic retrospective of 2016. Deciding on our “best” photos is very subjective, and I didn’t actually ask Mary’s opinion on these. I just scrolled through all the folders of photos from the past year and picked my favorites. So, in no particular order, here are my favorite photos that we took during our adventures in 2016. 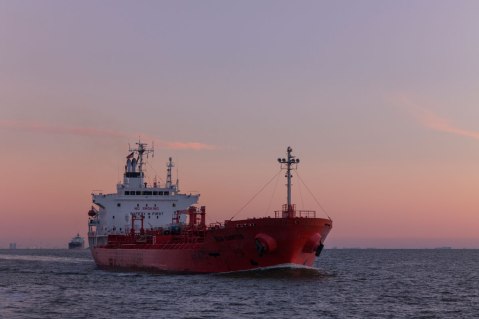 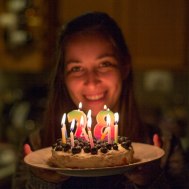 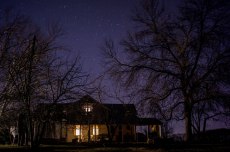 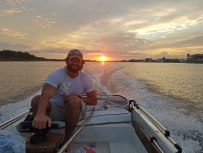 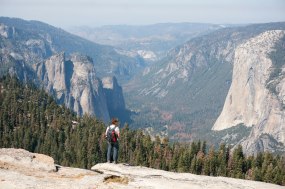 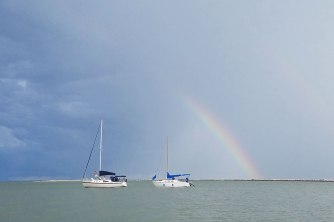 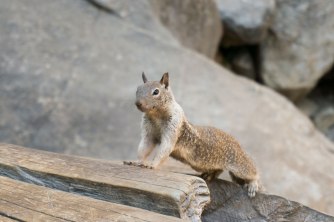 Mary spent last Saturday evening in a classroom taking the ASA 201 written test, so our friends Andy and Jayne were kind enough to invite me along on a sunset cruise. 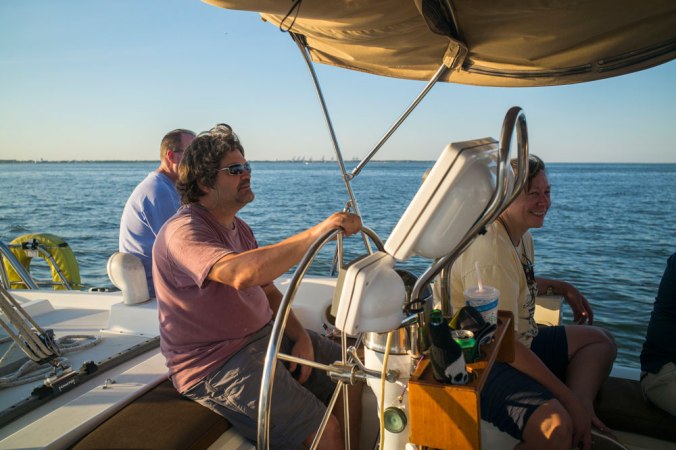 All the usual suspects were aboard. 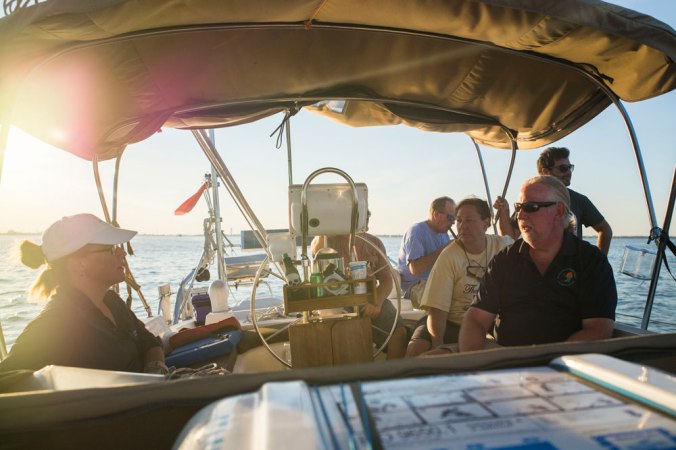 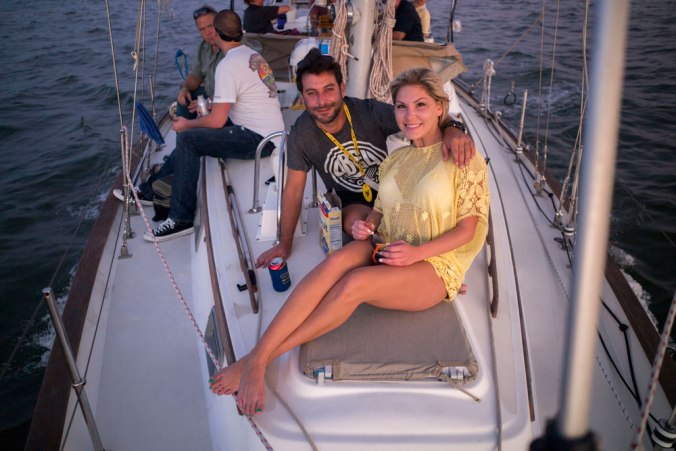 And I got to a chance to bring along my friends Chris and RJ, who have never done much sailing. 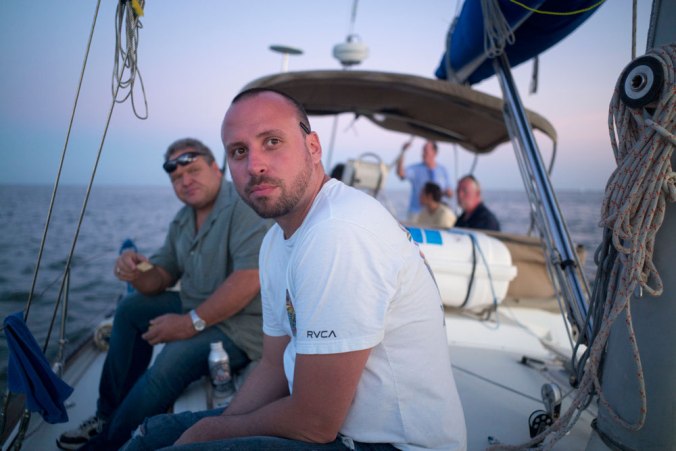 We were making our way down the channel when we noticed several dolphins cruising along with a sailboat not too far from us.

And soon they were on their way over to say hello to Hippokampos as well. 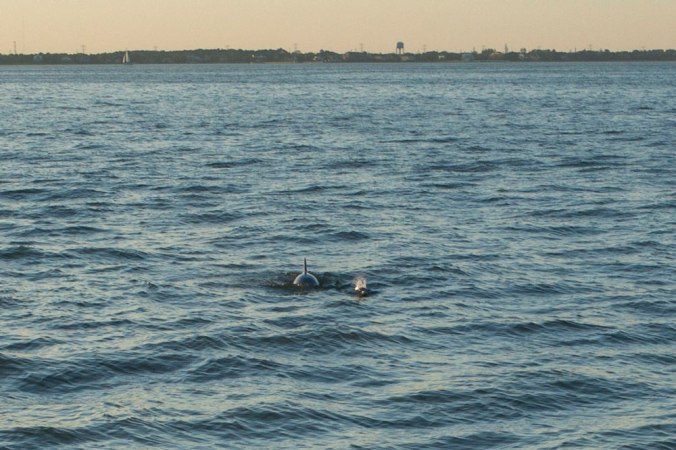 As we made our way towards the ship channel they dropped back. This time of year they seem to spend more time in the upper bay.

Soon the sun was dropping towards the horizon. It never ceases to amaze me how fast it moves once it starts setting.

And just as the sun disappeared somewhere over there behind the Kemah Boardwalk, the wind picked up, so we turned the boat around and made another lap around the bay in the dark. 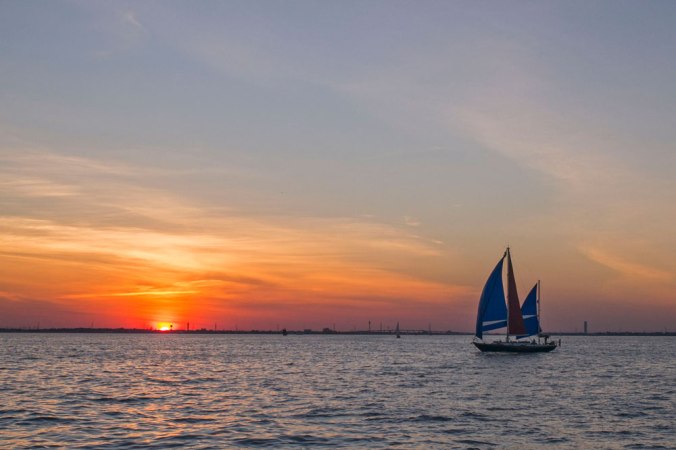 Tonight we’re packing for a week-long charter in the Spanish Virgin Islands. Unlike weekend trips aboard Gimme Shelter where I can bring along most anything I want, space is limited.

Packing clothes is the easy part. I’m throwing in four shirts, two pairs of shorts and two swim suits. Done. However, I’ve been perplexing for more than a week as to which lenses are going into my camera bag.

Once upon a time I used to travel with just a small point and shoot camera in a dive case. Life was simple, and the photos weren’t that bad.

But through the years I suffered from gear acquisition syndrome, or GAS, as it’s known by most photographers. I kept changing camera bodies and accumulated more and more lenses until traveling with a camera ended up extremely complicated. When you have limited space, how do you decide what to bring along?

The 50mm f1.4 is my favorite lens. It’s razor sharp, it creates a nice shallow depth of field, and it’s my number one choice for video and portraits. It’s also said that a 50mm best replicates a normal human field of view. 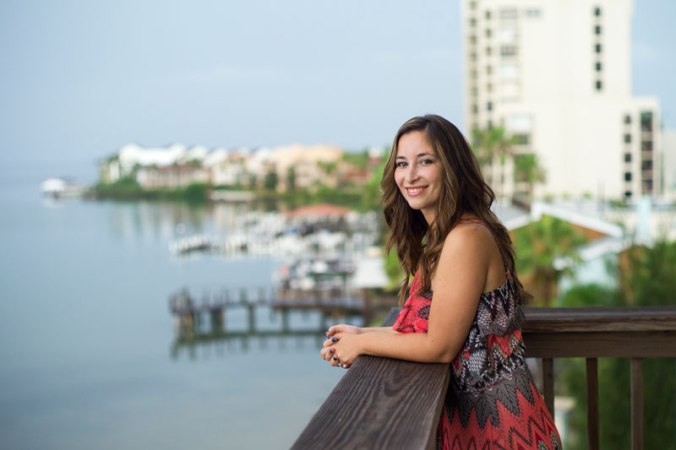 While not my favorite, the 28mm f2 is my most used lens. Sharp as a tack and great in low light, I usually find myself needing the 28mm for landscapes, sunsets, architecture, group photos, photos of people around tables in classrooms or restaurants, and any wide angle video shot. 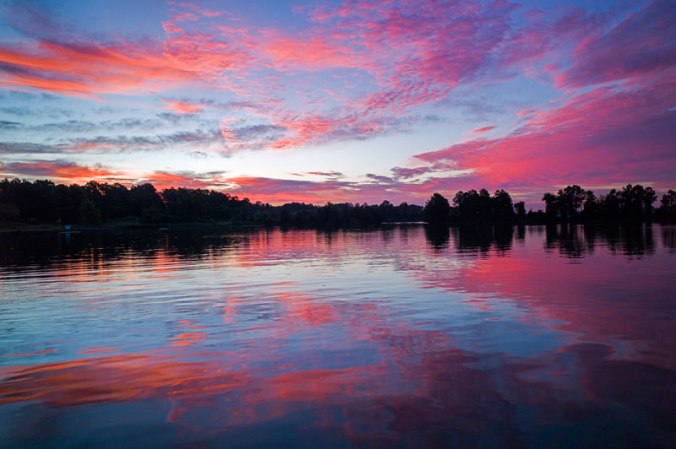 However, when you’re on a sail boat, you can’t back up from your subject or you’re in the water. The 28mm is just wide enough to grab the cockpit, but if I want to capture a shot with the entire mast and sails, I’ve got to swap to the ultra-wide 15mm f4.5. The 15mm is also a must for interior shots on the sailboat.

But lately all my best shots seem to be with an old 90mm f2.8. The 90mm has been giving me some really nice portraits as well as some nice landscape shots when I need to cut out the foreground. 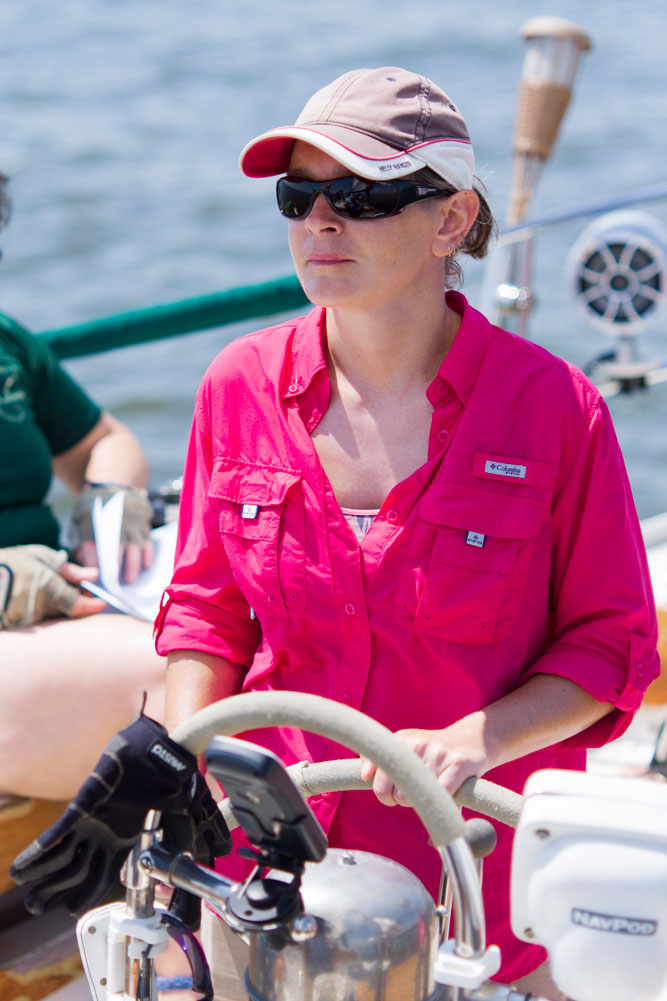 But the 90mm just doesn’t quite get me close enough for birding or wildlife. While it tends to suffer from a bit of chromatic aberration and weighs more than all the previous lenses combined, my 135mm f2.8 can catch a nice bird shot if the bird is within throwing distance. 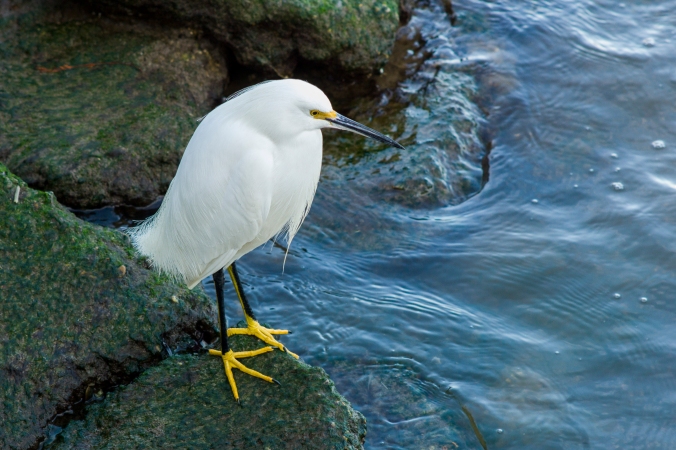 Of course, my new favorite lens has been the 280mm f2.8, which came with its own suitcase and weighs about ten pounds. If I’m in the very back of the boat, I can capture just a person’s face up on the bow. That might make it too long for shooting on the boat, but it’s great for shooting wildlife or people on other boats. The downside is that if I were to take it along, it would count as my carry-on luggage, and I’d have to check my real bag.

But sometimes the 280mm isn’t long enough, so I’ve got the 400mm f6.8. I carried this lens in Belize to capture exotic birds, monkeys and kinkajous. I caught a few birds, but it turns out the monkeys and kinkajous only came out in the dark, so it was a bit useless in the middle of the night.

So that’s seven prime lenses that I REALLY need to bring along.

I know what you’re thinking. You’re saying, hey dummy, just get a zoom lens and be done with it.

Well, I have nothing against zoom lenses. In fact, I’m definitely bringing a 16-50mm f3.5-5.6 zoom with the Sony NEX-6 since that’s the lens that fits in the dive case. It’s not as sharp as the primes, and it has some barrel distortion at the wide end of things, but if I want underwater shots, it has to be in the bag. 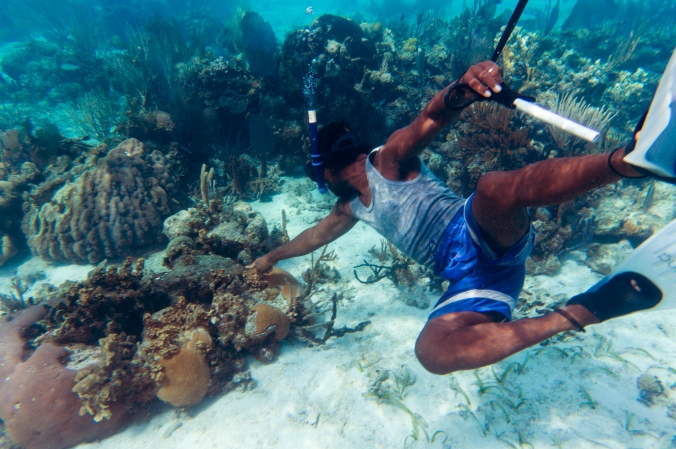 I’ve also tried a 70-200 f4.5 to replace my 90mm and 135mm primes. Yes, it was more versatile when it came to framing shots, but again, it just doesn’t seem as sharp as my primes. I also lose a stop of light, so I can’t shoot with it as early in the morning or as late into the evening as I can with the f2.8 lenses. 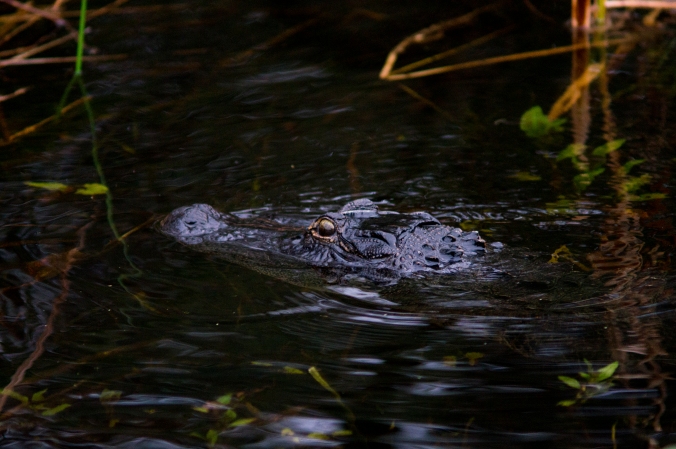 I definitely cannot pack NINE lenses, one of which has its own suitcase, for this trip. Even if I could pack all nine, there’s no way I would use all of them in a week. Yes, each lens has a purpose and is a tool for a certain type of shot, but unless I’m hired for that specific job, those lenses are nothing but a security blanket.

Do you want the big picture? Shoot your trip with a wide.

Want to live in the moment with a first person view? Slap on a 50mm.

Want to focus on the details of a place or event? Pack nothing but a telephoto.

Discover what you want to say through your photographs and choose the focal length that best conveys that message.

So here’s my challenge. Next time you go out shooting, simplify everything. Decide how you want to see the world, take just one lens, and discover what kind of story you can tell.

Of course, I’ll still be taking at least three lenses to the SVIs. I mean, come on, I’ve got to get some dolphin pictures!

We invite lots of people to go sailing with us, but schedules are complicated, lives are busy, and the weather hasn’t been too cooperative lately. However, we did finally have a break in the rain long enough Saturday afternoon to take our friends Andy and Jayne out to Redfish Island and back. They were the first guests we’ve had on Gimme Shelter since Thanksgiving.

The wind was shifting around a bit, but we made it from the Kemah bridge to Redfish with only two tacks, and we had no trouble setting the anchor. Mary had chicken legs marinating in a honey mustard sauce, so we got a chance to use the new grill again.

It was perfect weather for an outdoor dinner in the cockpit. We’ll be on the same catamaran as Andy and Jayne in the Spanish Virgin Islands, and I’m definitely looking forward to more of these dinners overlooking beautiful blue water.

After dinner we followed the sun home and watched it disappear over the horizon.

Thank you to Andy and Jayne for sailing with us. It’s already raining again, but hopefully we’ll be back on the water next weekend.

After five weeks of trimming sails on other people’s boats, I couldn’t wait to get out and pull the lines on Gimme Shelter … and we couldn’t have asked for a more beautiful February weekend.

However, we couldn’t skip the most important meal of the day, so Mary fired up the Origo and made some eggs.

When we left around noon, the sun was shining, winds were a steady 10 knots, and the thermometer was hovering around 65. Our original goal was to sail to Redfish Island and then anchor for a picnic, but with a prevailing south wind, and no real desire to beat hard all afternoon, we ended up just practicing adjusting sail trim and tacking back and forth across the bay instead. 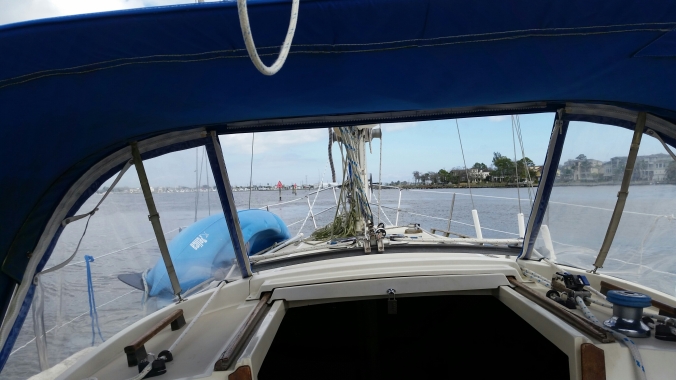 The dogs, as usual, were not impressed with the magnificence of the open water and settled in for naps. 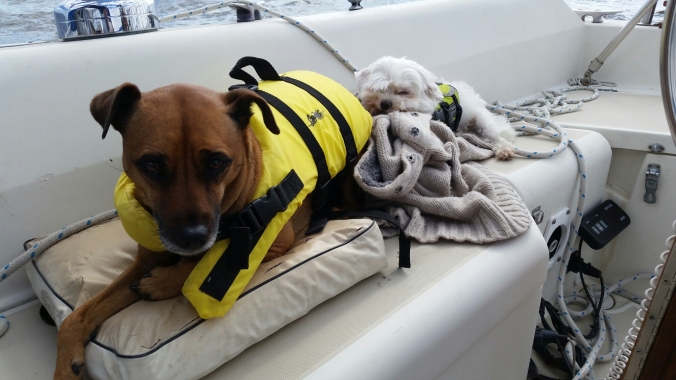 Dixie Belle has fallen off multiple docks and multiple boats in the past few months, so just to be safe we put the life jackets on the dogs. Dixie actually likes wearing clothes, so she’s always excited when we pull them out. However, Tex HATES his life jacket and basically just mopes the entire time he has to wear it. 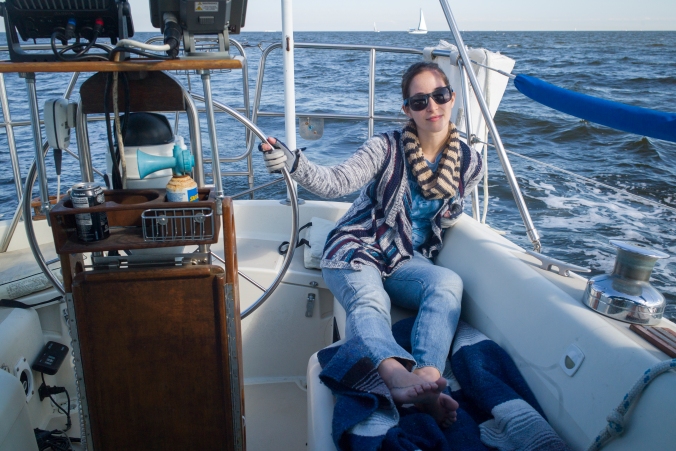 Mary spent some time at the helm while I raised sails. It was the first time I’d gotten to play with the whisker pole on our boat. It’s not new, I just didn’t know how exactly to use it before crewing with other people. The whisker pole was never discussed in Basic Keel Boat Sailing 101. I’m still trying to decide if I want to add a spinnaker crane to the masthead and rig another halyard for a drifter or not.

After a couple tacks, Mary and I switched jobs, and I went back to the helm while she pulled lines. This was my first trip out since installing the new Garmin GPSmap 741x, and I have to say, I really like it. I noticed that along with my speed and heading it also gives me the battery voltage. That’s actually quite a handy feature. I can tell when the alternator is charging, and I can tell when we need to shut off the refrigerator because the batteries are too low.

Although it was seasonally warm, it’s still February, so when the sails were blocking the sun, it got a bit chilly. Luckily Mary had no shortage of dogs willing to snuggle with her.

One of the more interesting moments of the sail was when I went to trim the jib, and I found we had a honeybee on the line. I have no idea what inspired him to fly out into the middle of the bay, but he seemed quite tired and not the least worried about me messing with the lines. 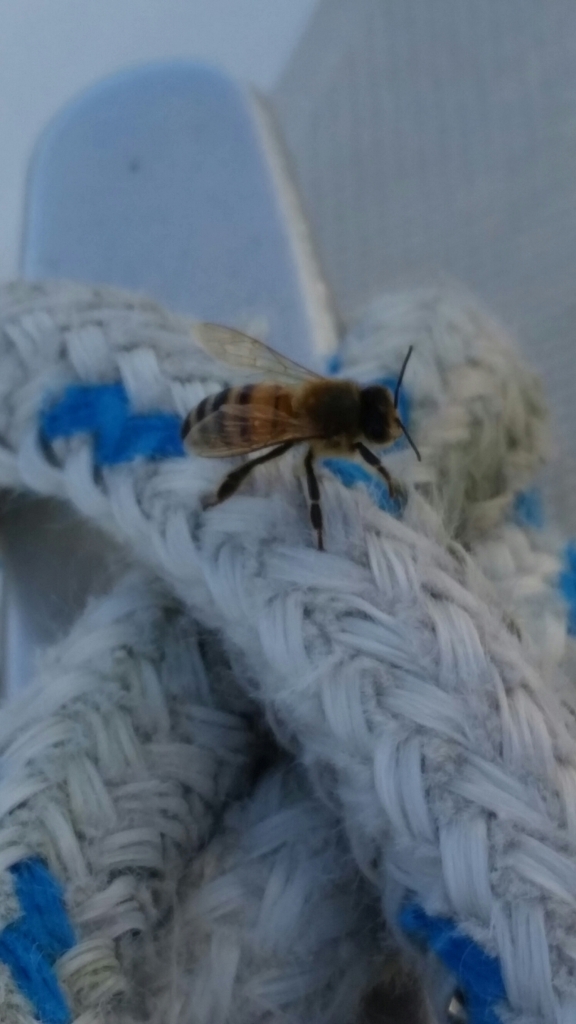 In fact, I managed to untie the line, trim in the sheet, and re-tie it without him ever flying away.

He rode along with us for about 20 minutes, then I looked back over, and he was gone. I hope he made it back to shore.

Saturday was “Yachty Gras,” the name Kemah gives to its Mardi Gras boat parade, so we headed back to the marina around 4:00, so we wouldn’t miss it.

Our neighbors on Friday Yet were in the parade and spent the entire day decorating. Their krewe theme was The Great Gatsby. Their makeshift steam pipe on the upper deck not only lit up, but it also made steam.

We spent the rest of the evening grilling burgers and enjoying the sunset with friends. 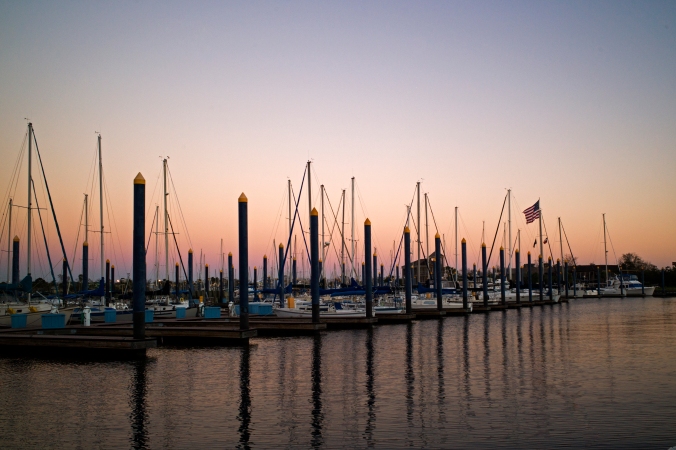 Hopefully we’ll get to do it all again next weekend.