If you’re a sailor its pretty hard not to run into someone you know at the Texas Renaissance Festival on pirate weekend.  We like to go one weekend a year and camp both Friday and Saturday nights.  This year it just happened that pirate weekend was one of the times when we were free.  After all you can dress like a pirate on any weekend really. 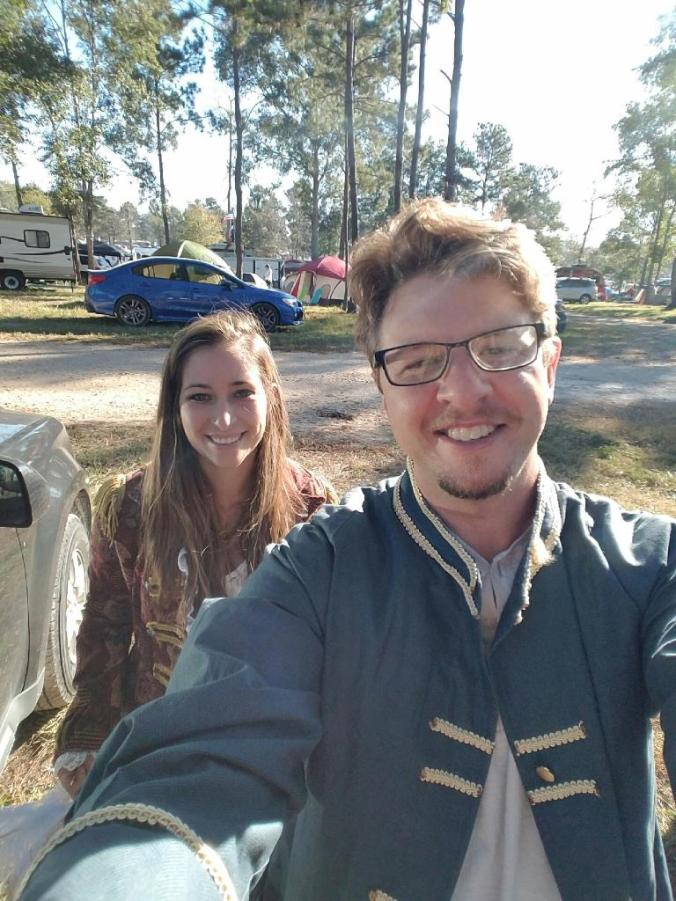 We got to camp around 3 and our friends Shari and Daniel had already staked out a healthy size spot with folding chairs.  We created our little pirate nest and then cracked open some beers to wait for the rest of our friends to arrive. 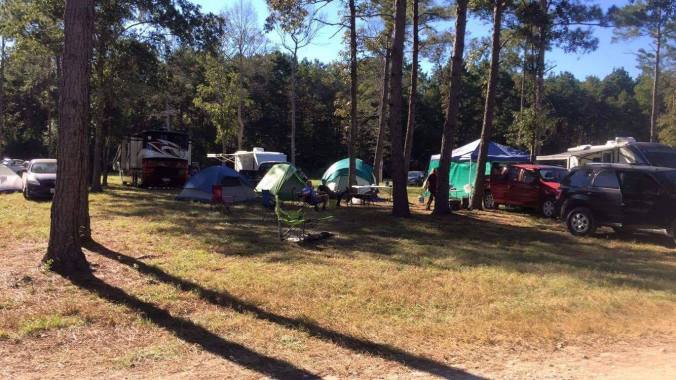 Much music was played and much fun was had, and before long it was Saturday morning and it was time to put on your best pirate outfit and head into the festival. 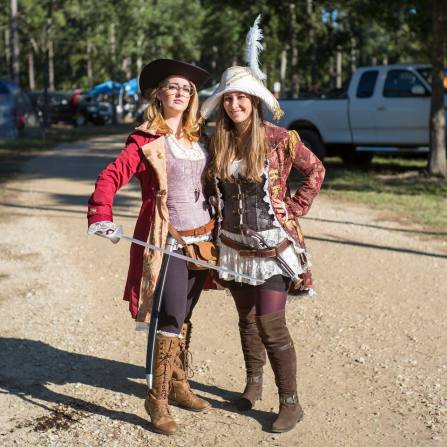 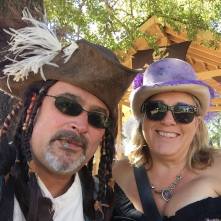 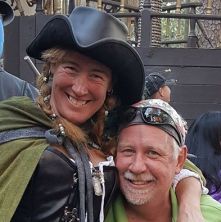 Most of the activities inside Renfest involve spending large amounts of money, so we like to take advantage of a good vantage point and just people watch. 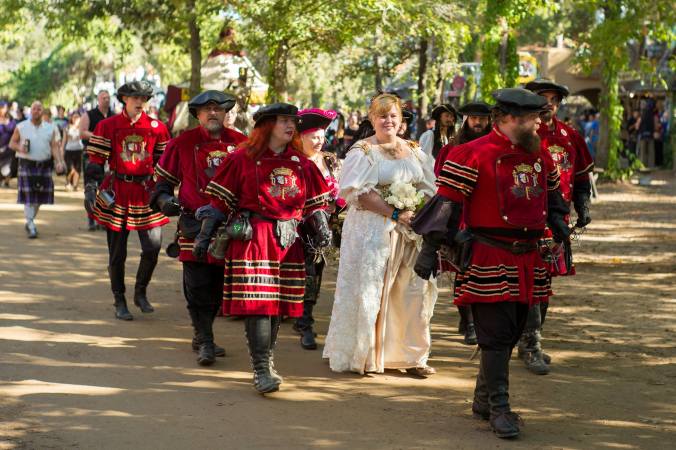 A lot of people are pretty period appropriate, but then there are always a few with no clear idea as to the theme of the park.  Here are a couple ents in their natural habitat. 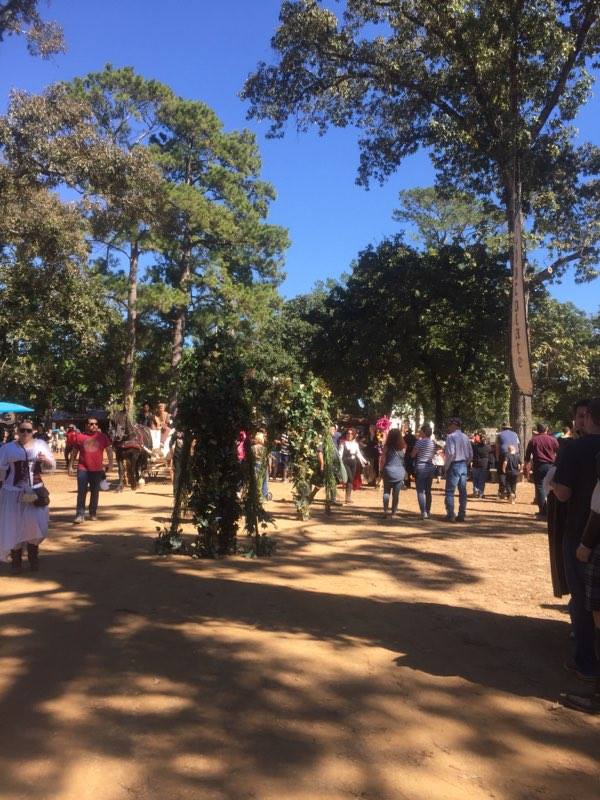 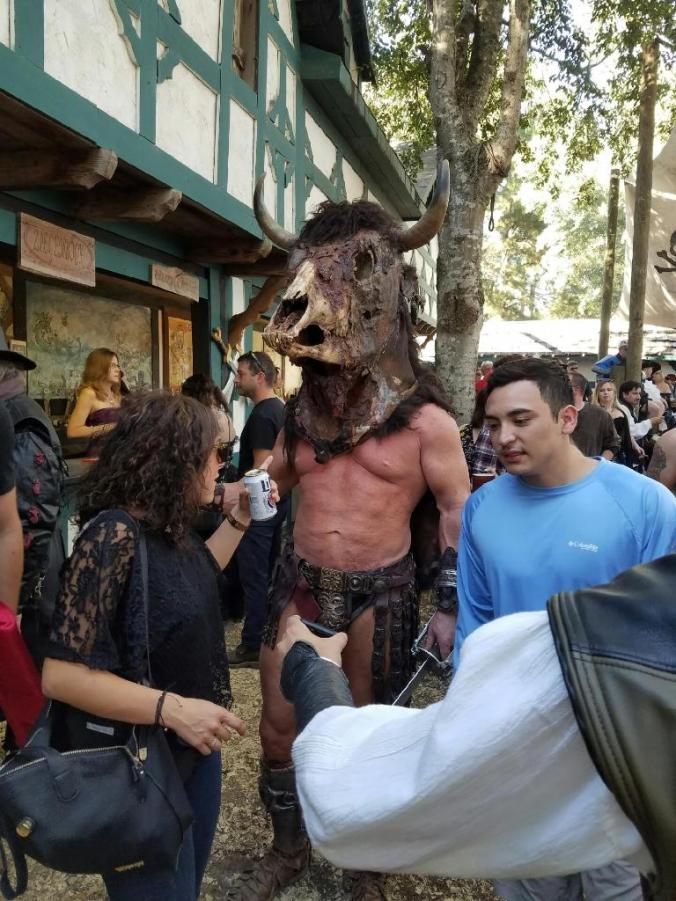 There are a lot of shows to see but they are exactly the same every year.  One of the shows we’ve found is just as good every year is the belly dancing show in the Agora.  Plus the bonus of Greek food. 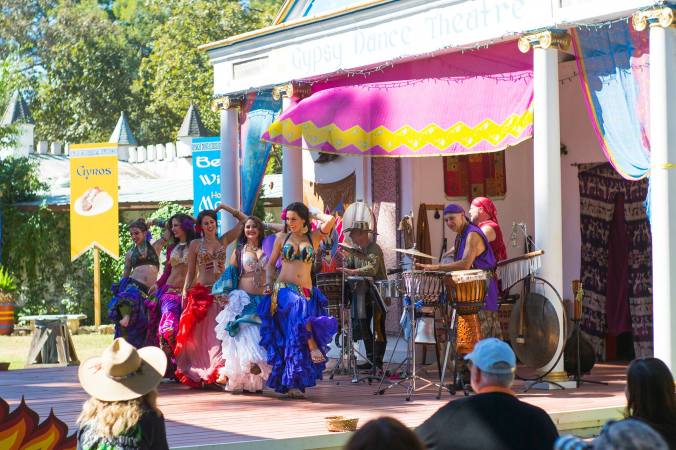 We met up with even more pirates at the Barbarian Inn and we all headed over to the Sea Devil Tavern. 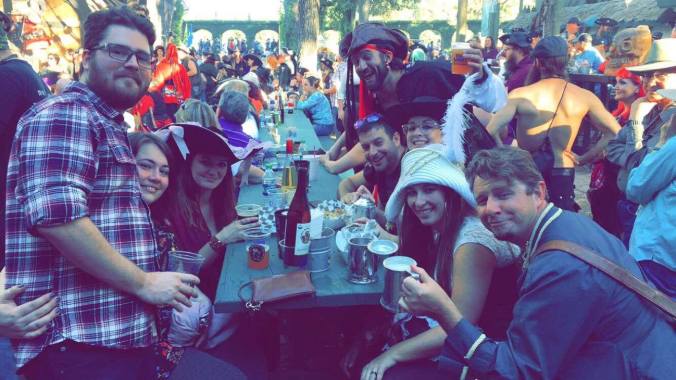 There was quite a bit of ruckus shouting and mug banging, and we decided we needed to head out to purchase our own clinky mugs. 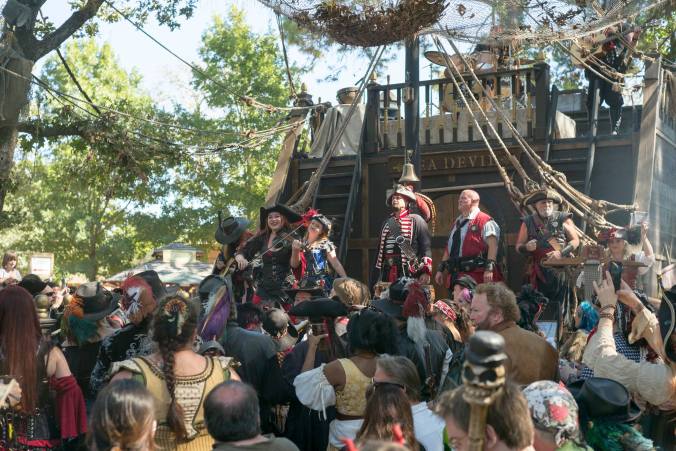 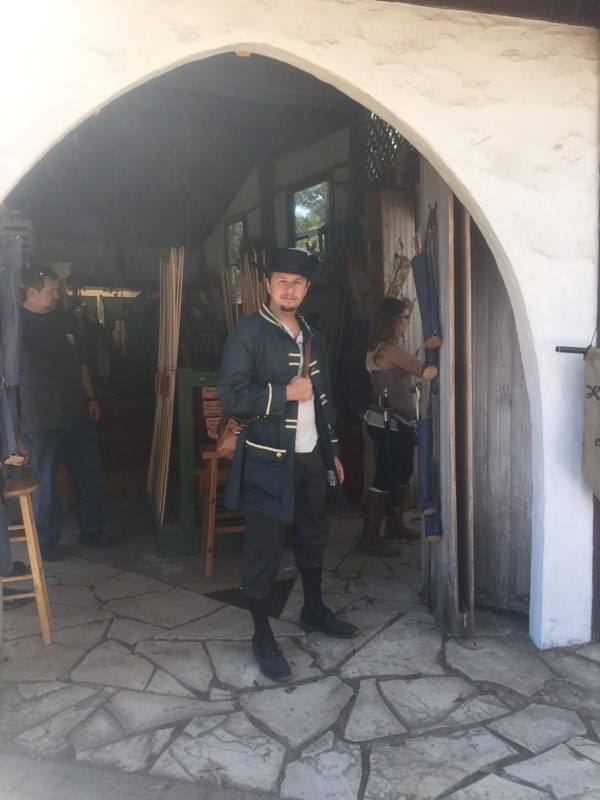 All in all a great weekend with friends.  In the words of a wise wizard I know “Go out and be merry, pretend to be pirates and forget your problems” 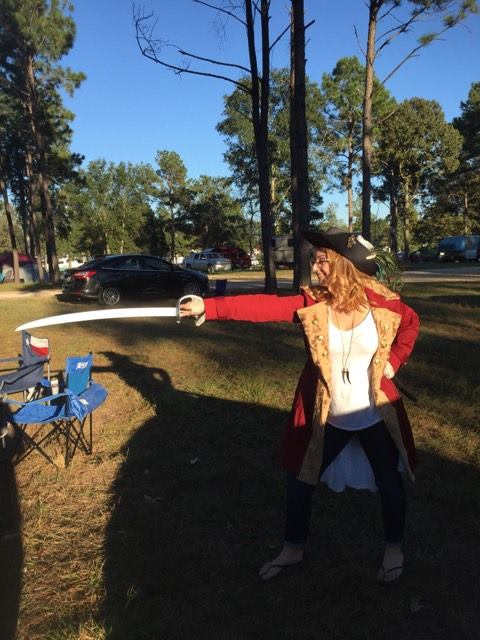 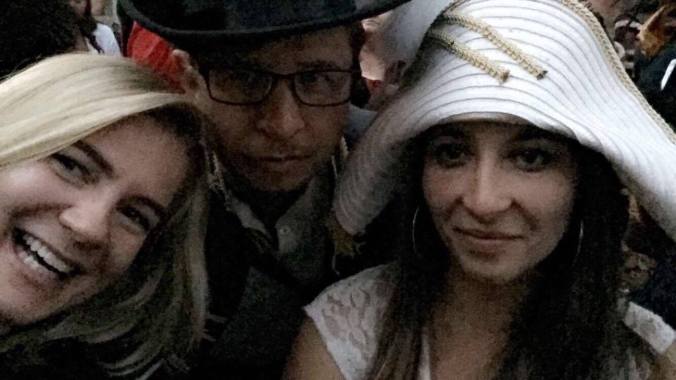 I have always wanted to visit this delightful maze of a victorian mansion. While we were visiting San Jose, California for a wedding, I was finally able to convince my family to come along for a tour.

In 1881 Sarah Winchester lost her husband, William Wirt Winchester, to tuberculosis just a month after losing her infant daughter to Marasmus. Deciding she was cursed, she visited a spiritualist who proclaimed that there was only one way to escape the spirits of all the people killed by Winchester rifles. If she began construction on a house, the spirits couldn’t touch her as long as it remained under construction. 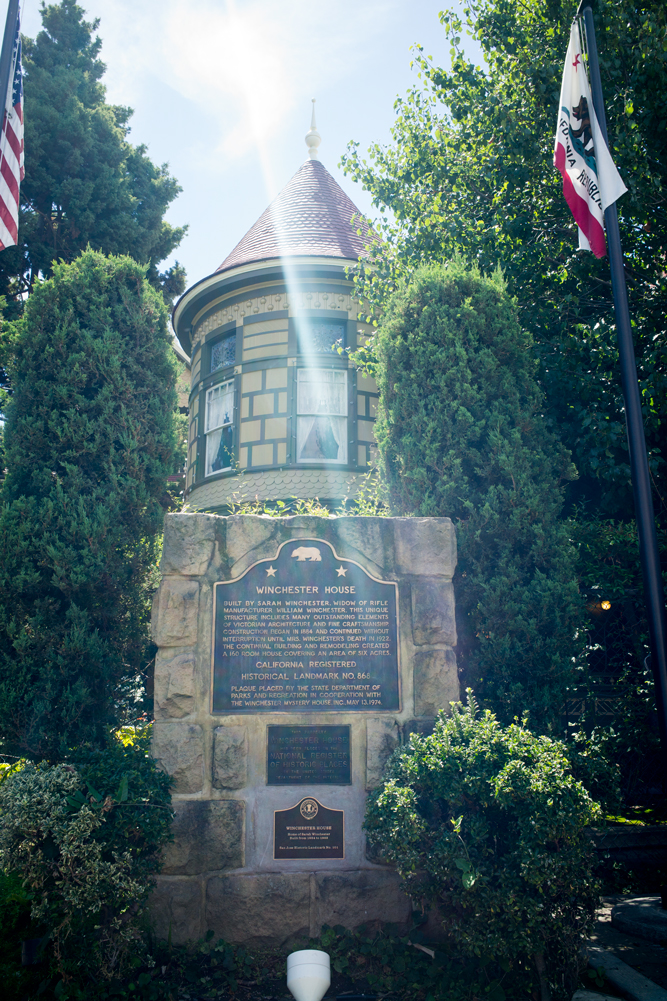 Mrs Winchester inherited several million dollars as well as a 51% share of the Winchester company. This gave her a comfortable daily income of $1000 in a time when a normal daily wage was $1.50.

In the height of its glory the property had 161 acres of farmland including many orchards and beautiful gardens, and the house was seven stories tall. Today the property takes up about one city block.  The house was damaged badly in the earthquake of 1907, and instead of repairing it. Mrs. Winchester blocked off that portion of the house to never be used again, considering it cursed. 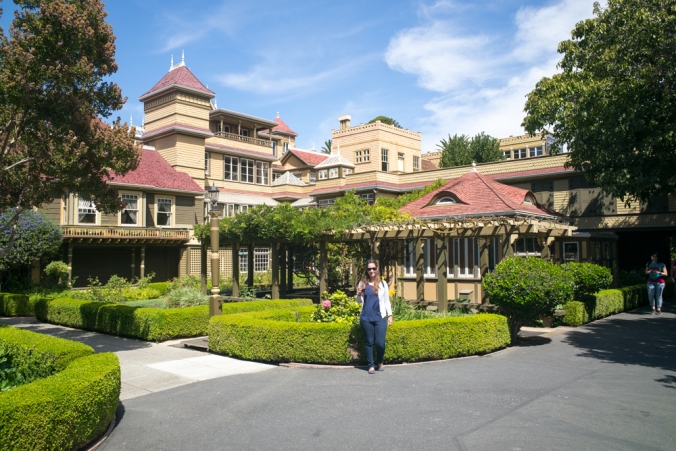 After her death her niece quickly auctioned all of her furniture and sold the house for next to nothing. When she died the estate was huge but sprawling and unfinished. It contained 160 rooms, 2,000 doors, 10,000 windows, 47 stairways, 47 fireplaces, 13 bathrooms, and 6 kitchens. It however had extensive earthquake damage on one side that was never repaired, and upkeep required a large crew of people. 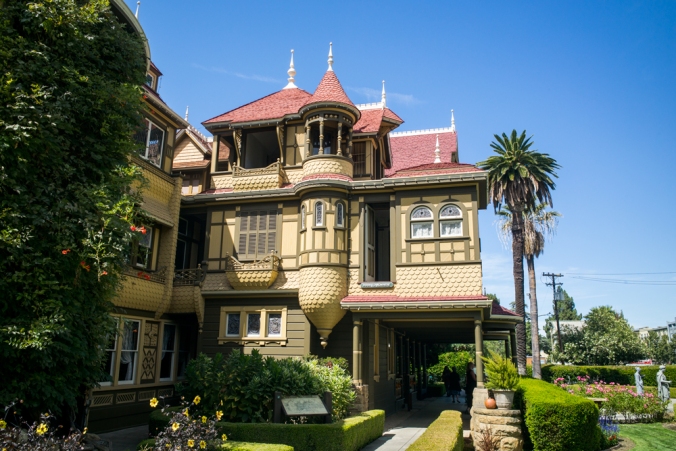 Today as you visit the Winchester House there is a confusing mix of modern tourism and historical preservation. After walking through the gift shop full of all sorts of junk and knick knacks which have absolutely nothing to do with the house, paying a heavy fee, then being forced to take a photo while holding a Winchester rifle for possible later purchase (by the way, there’s no photography allowed inside the house), you will begin your tour of the house led by a historically costumed guide. While the guides provide historical information for different aspects of the house, they don’t really know a lot about Mrs. Winchester or the house specifically. This is because she never kept any journals or did any interviews. She also didn’t see many guests. Only a few of the rooms in the sprawling mansion are furnished. The rest are just bare walls, with a few scraps of old wallpaper here and there. This gives the house a feel that is more like a bizarre construction site than a haunted mansion. 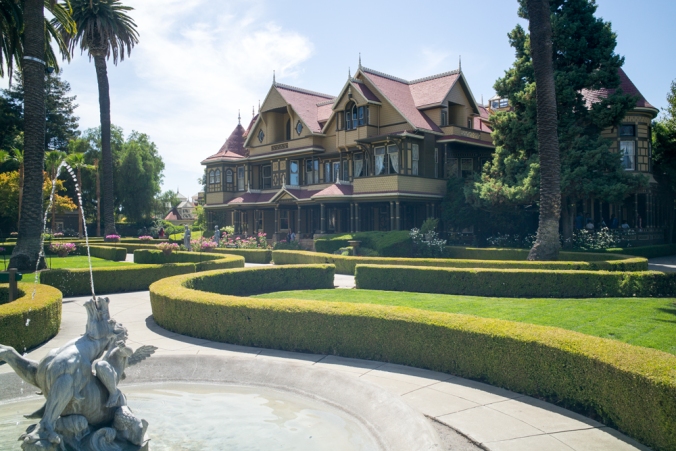 The assortment of windows to walls, windows on the floor, doors to nowhere, stairs to nowhere, etc. are pretty cool to see. They don’t really add an air of “mystery” though, as you can see the train of thought that went into them however bizaar. Mrs. Winchester would just build a new room next the house, then build a door to connect them.  She just didn’t deem it necessary to remove the old doors, windows or stairs. While it’s a little odd, I wouldn’t call it creepy.

Overall I enjoyed the trip. It was a bit more touristy than I expected, but there was a lot of interesting things to see, and our tour guides were very knowledgable about the history of  the region and technologies of the time. They explained to us the systems for gas power, and how the estate pumped and stored its own water. The house also had 4 elevators. It’s not very often you get to see the very best that 1900 had to offer, especially on this scale.